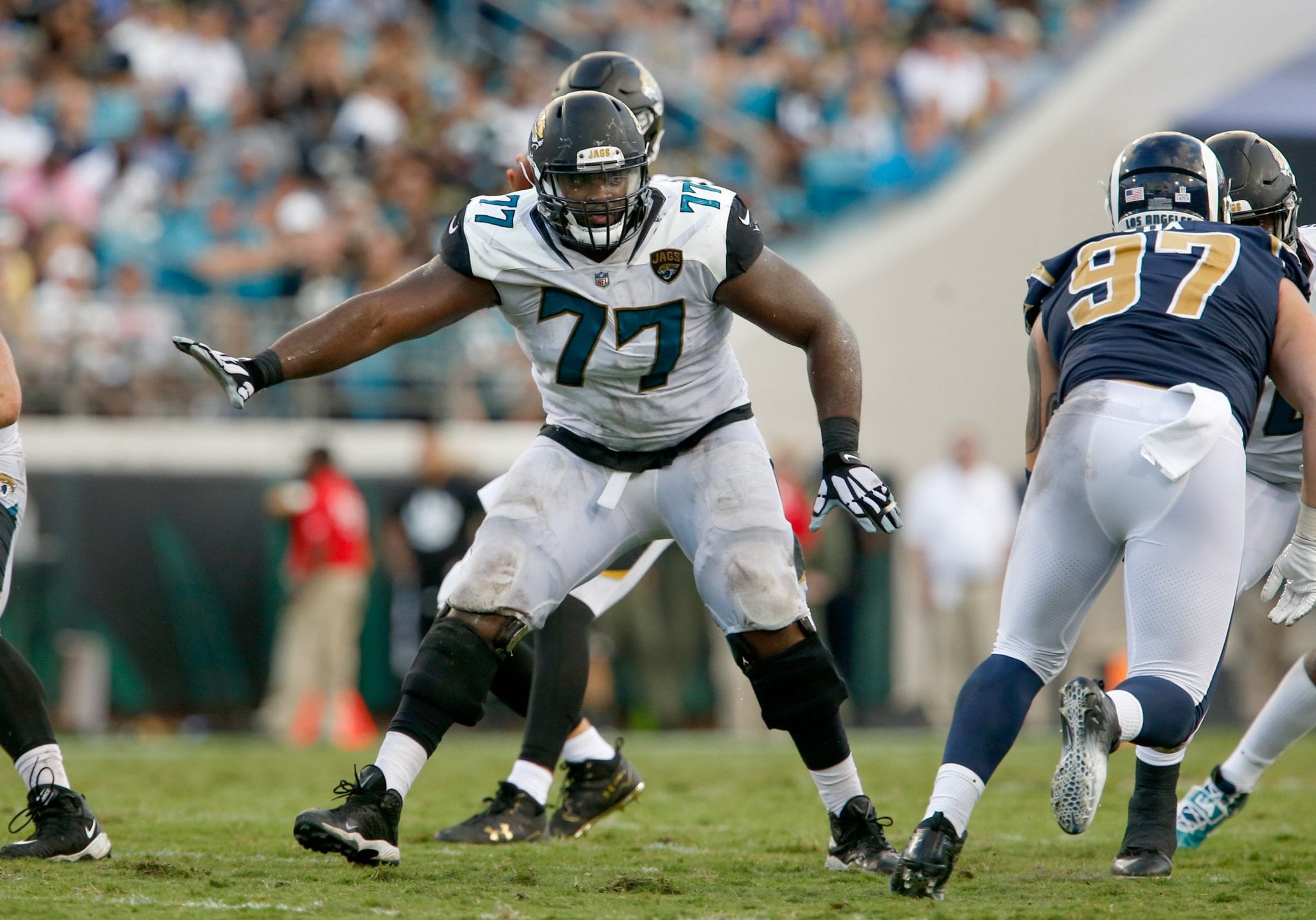 For the second time this season, a New York Giants offensive lineman is making the move to the Jacksonville Jaguars. This time, however, the player is Patrick Omameh, who came from Jacksonville during the offseason before eventually being cut from the team for poor performances through the first half of the season.

Omameh’s two years as a starter in Jacksonville were more successful than the starts he had in New York, so it’s interesting to see whether or not the Jags will be able to turn him around and get some value out of him. Omameh won’t be the only other former Giant that the Jaguars are trying to turn around, either. Much maligned left tackle Ereck Flowers joined the team after being cut by the Giants, with some believing that better offensive line coaching would turn Flowers around.

We have yet to see if Flowers has improved or not, but Omameh was already a starter for two seasons in Jacksonville so it looks like out of the two players, he would have the easier time bouncing back. If Omameh does find new success in Jacksonville, it should definitely look bad on Giants offensive line coach Hal Hunter as well as others within the organization that are responsible for training the team’s blockers.

Granted, Hunter was only hired in January and hasn’t had a full season to work with this group of players, but it’s still hard to excuse the Giants having one of the worst offensive lines in the league despite revamping the position group during the offseason.

Despite Omaneh getting cut from the team, the Giants will still have to pay him more than $1M this year and $3M next year, which will count against the salary cap. Not a great outcome for a signing that should have shored up the right guard position for at least this season as part of the much hyped offensive line revamp. 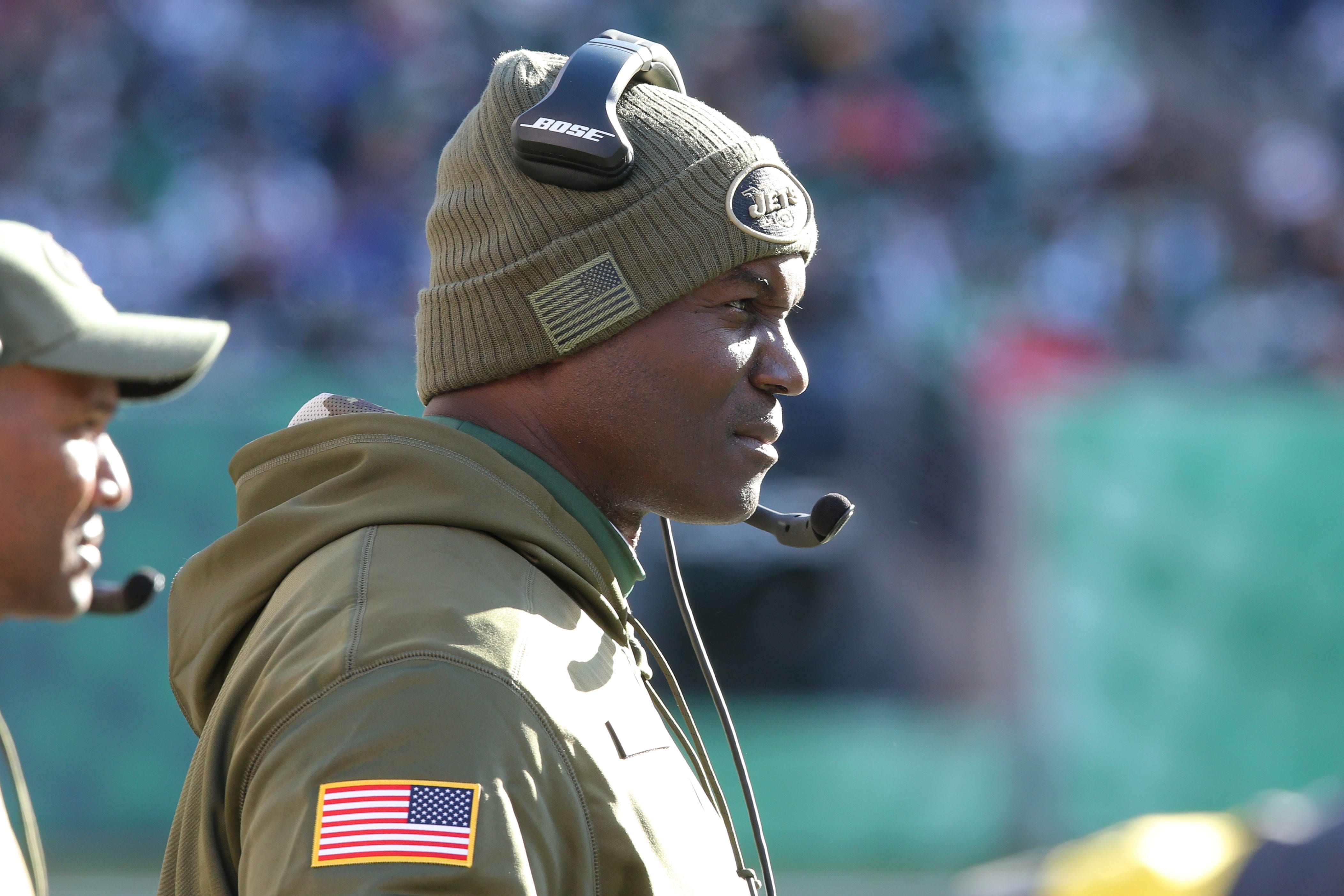 The New York Jets were embarrassed by the Buffalo Bills on Sunday. With Sam Darnold out, Jets fans were hopeful that Josh McCown would pick up where he left off last season. Instead, we saw the most impressive performance by the Bills in the recent memory. Here’s what we learned about the Jets:

The resurgent Josh McCown we saw in 2017 was nowhere to be found. McCown finished the day completing only 50% of his passes for 135 yards. Games like this one are the reason the Jets traded up in the draft to be able to get their choice of quarterback.

Third Down Is a Major Issue

The Jets were 1 for 12 on third down attempts on Sunday. The offensive game plan was both bland and stale. Third down has been an issue for the offense this entire season. The Jets coaching staff has to come up with some answers in this area to remain competitive this year.

Jeremy Bates Is Not the Answer

Jeremy Bates was only able to manufacture one touchdown drive, and two scoring drives in total, against a team that isn’t exactly the 1985 Bears. Darnold and Robby Anderson both missed the game, but that is no excuse for such a lackluster performance. How the Jets ended the day with only 18 rushing attempts is beyond comprehension. The Jets were down early, requiring them to throw, but the play calling never set them up for success.

The Defense Still Has Room to Grow

Despite the score, the Jets defense probably played better than the final stat line showed. However, Matt Barkley looked like the USC quarterback the Jets thought they were getting. The Bills allowed Barkley to throw it deep early and often, something the Jets have rarely done this season. Morris Claiborne and Marcus Maye both allowed throws to pass right in front of their facemask on multiple occasions. Throughout the day, Jamal Adams looked like the only cornerstone piece to build upon.

The Jets have a lot to fix over the course of their bye week. The road ahead doesn’t get much easier, although at this point the opponent is immaterial. The Jets need to get back to basics, run the ball, and convert some third downs. If they can’t do that, they will not compete in any game the rest of the way. 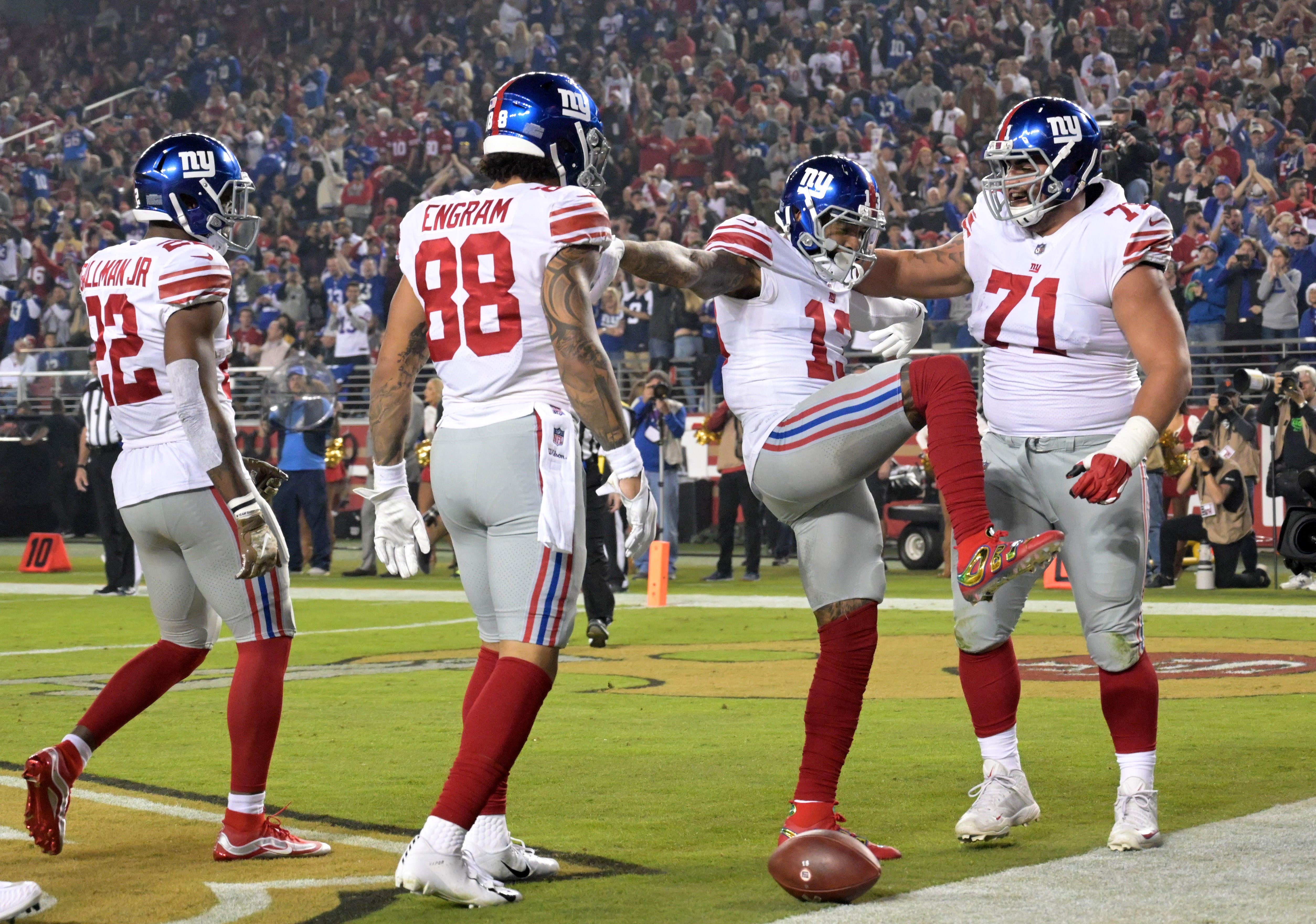 With the New York Giants and head coach Pat Shurmur stealing a last second win against the San Francisco 49ers on Monday night, they currently sit as the third-worst team in the league at 2-7. Big Blue is far from being a quality team, but they took a step in the right direction in week 10.

The Giants came off the BYE with a head of steam, maintaining their composure in the locker room and looking forward and not back. Shurmur has done a stellar job keeping his men motivated, even after such a disastrous start. There were moments of worry that the locker room was falling to its demise, similar to the result of 2017. Shurmur didn’t turn a blind eye – he rather picked up the emotions of the team’s most prolific players and corralled them like lost sheep.

How did the New York Giants impress Pat Shurmur in the win?

“I thought for the most part our pass protection was as good as its been this year,” Shurmur stated on Tuesday.

New right guard Jamon Brown, was inserted as the starter over John Greco. Brown was a bight spot on the offensive line, showing his mental capabilities by recognizing stunts and picking up key blocks. He played an instrumental role in Eli Manning’s first touchdown pass to Odell Beckham Jr.

In regard to Brown, Shurmur stated:

“He’s only been here a little over a week and he was able to go in there and really show up in a way that you don’t typically see for a guy that’s been here that short of a period of time.”

He certainly did, Pat… In fact, Brown looked ‘far’ better than Patrick Omameh. Remember him? The player that Dave Gettleman invested $15 million in over a three-year period. Well, luckily not much of it was guaranteed. Just $3.5 million will be allocated towards the salary cap in 2019 as dead cap space.

In addition to the Giants’ new acquisition, left tackle Nate Solder had a stellar game. He finished with a PFF score of 92.7, beating the next highest offensive player by nearly 20 full points. He wasn’t spoken of once the entire game. It’s possible the Giants might be onto something here on the offensive line. With the return of Jon Halapio next season and a potential right tackle signing, the trenches might finally be secured. 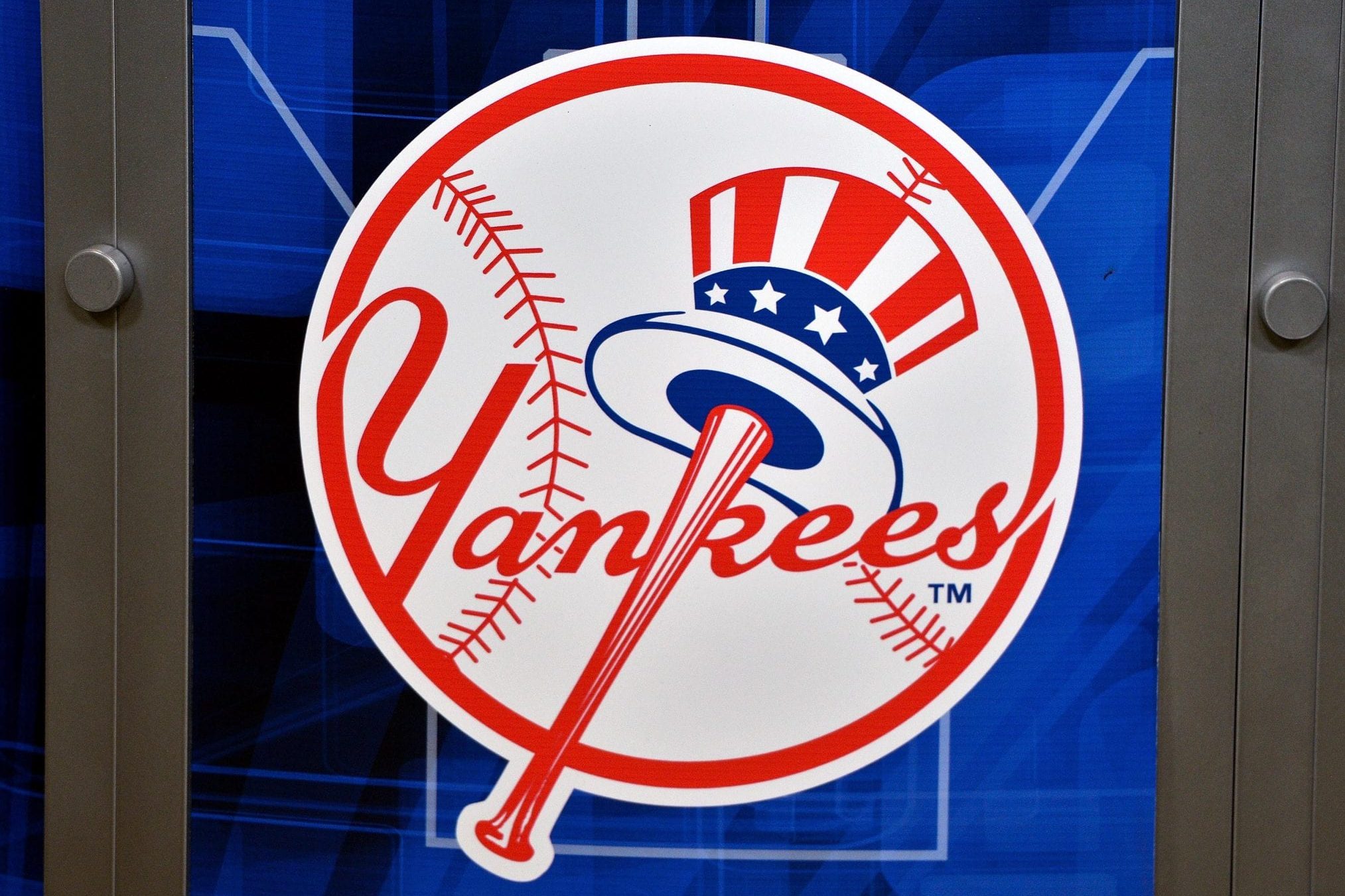 Most fans were pleased when the New York Yankees pulled the trigger on a trade on November 13, 2008, acquiring switch-hitting outfielder/first baseman Nick Swisher and righthander Kanekoa Texeira from the Chicago White Sox in exchange for infielder Wilson Betemit and righties Jeff Marquez and Jhonny Nunez. By the time he left the Bronx after the 2012 season, Nick had hit 105 regular-season home runs and driven in 349.  In eight postseason series with the Yanks, including the win in the ’09 World Series, Swish homered four times, and drove in seven.

On November 13, 1978, Luis Tiant joined the Yankees. He had been with the Red Sox, but was the first veteran to sign following that year’s re-entry draft. El tiante would go 13-8 for the Yanks in 1979.

Yankee November 13 birthdays lead off with a touch of class, Mel Stottlemyre (1941). Mel bridged the great Yankee teams that culminated with his 20 wins in 1965, and he carried himself with dignity in the tough years that followed, starting with the 20 losses he suffered in 1966. He pitched at least 250 innings in each of his nine full seasons, posted a 164-139 record with one save in his Pinstriped career, and only played for the Yankees, after having signed with them as an amateur free agent before the 1961 season. He served with distinction as Joe Torre‘s pitching coach with the Yanks from 1996 through the 2005 season, winning four rings during that time.

Lefty-hitting outfielder Jim Delsing, born on November 13, 1925, had a home run and five rbi’s in 21 games for the 1949-1950 Yanks, but Jim’s greatest claim to fame was as the guy who pinch-ran for midget Eddie Gaedel once Eddie walked in his only major league at bat for the Browns in 1951.