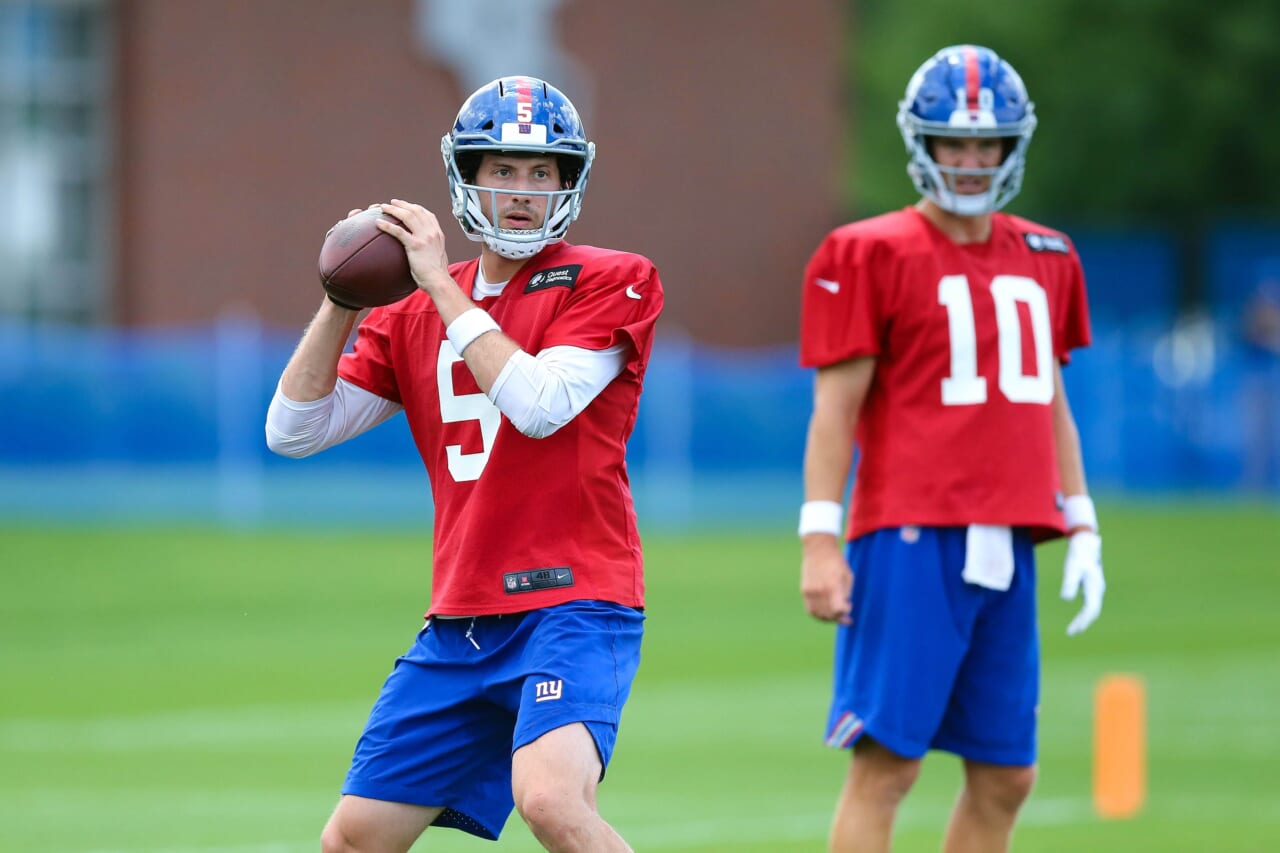 The New York Giants made several stunning moves over the weekend but none were as confusing as the waiving of second-year quarterback, Davis Webb.

Webb was inconsistent throughout the preseason but had the physical tools to become a solid quarterback with head coach Pat Shurmur at the helm. The Giants currently have three QBs remaining on the roster in Eli Manning, Kyle Lauletta, and Alex Tanney.

There were rumors of the Giants shopping Webb before roster cuts:

Rumors emerged before roster cuts that the New York Giants were looking to shop Davis Webb to another team. The Oakland Raiders were a landing destination that popped up frequently.

The release of Webb is truly interesting as he was a third-round pick from a year ago that turned some heads over the summer. Personally, this move makes little sense to me and should be questioned. 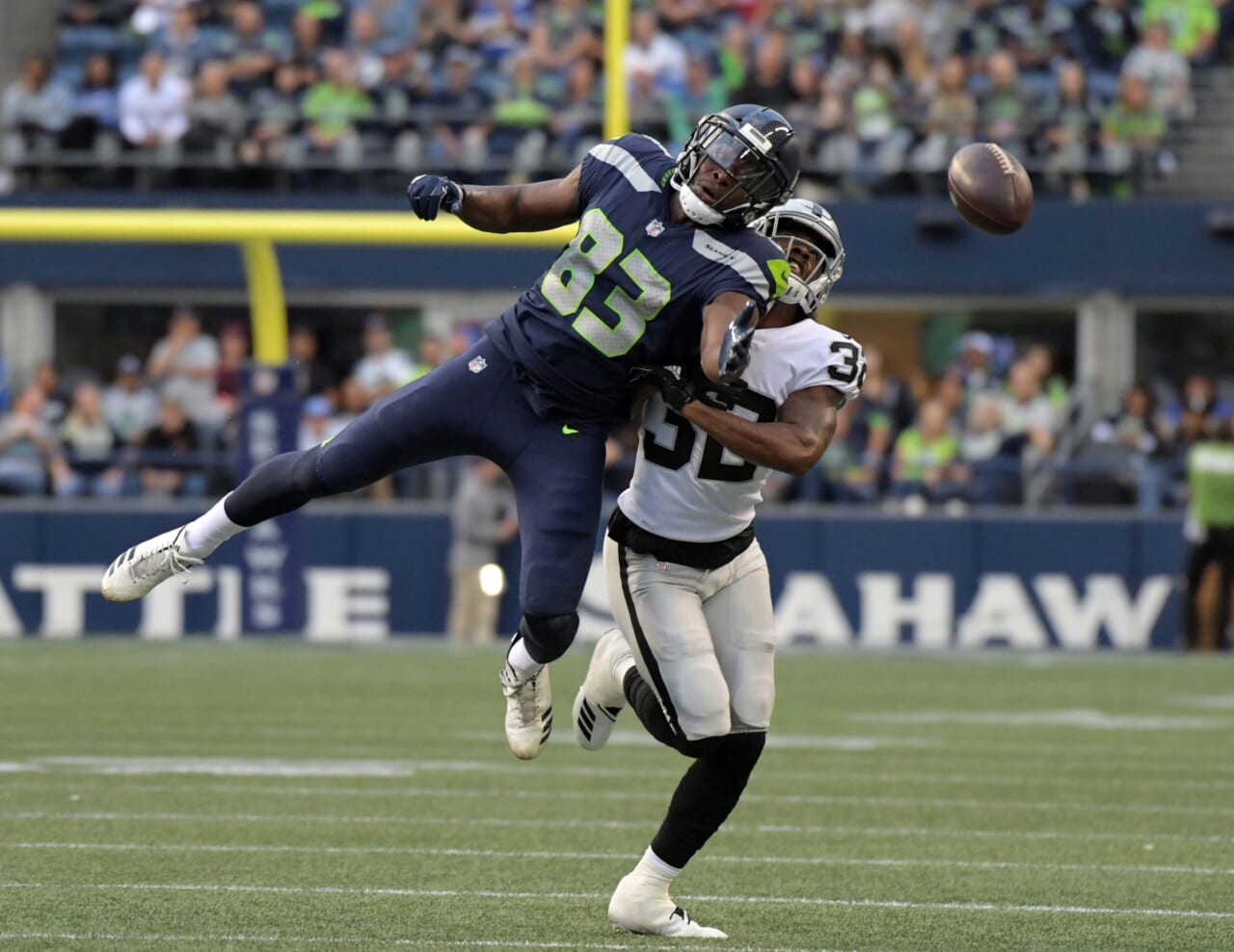 The New York Giants had the No. 2 waiver wire priority going into Sunday afternoon. This gives them the chance to grab a solid player that slips through the cracks. Only players that have played four years and under are eligible to be claimed off waivers, anybody else is a free agent that can sign with any team they choose.

Hamilton was the most intriguing name off of this list in regard to the secondary. In limited action this preseason he has been a menace.

In 11 coverage snaps, Hamilton was targeted 3 times and allowed 1 catch for 8 yards, and had 2 pass breakups ðŸ’€

Let’s put these numbers into perspective. On three targets Hamilton managed to break up two passes. That means that every pass that was thrown his way was catchable- this displays his ability as a man-coverage corner. The Giants play a 3-4 scheme that relies heavily on the corners to keep their assignments in-front of them.

Hamilton was originally an undrafted free agent back in 2016. He played sparingly over the course of his first two seasons and was placed on injured reserve early in October of 2017. He missed a majority of the season but remained on the roster despite the overhaul of the Raiders defense.

The New York Giants will get a player with serious potential:

With the Giants holding Janoris Jenkins, Eli Apple, Donte Deayon, and William Gay as the primary corners on the roster, it presents opportunity for Hamilton. Behind Jenkins the corners are relatively unreliable, which should give the third-year defensive back a chance to earn some serious reps. 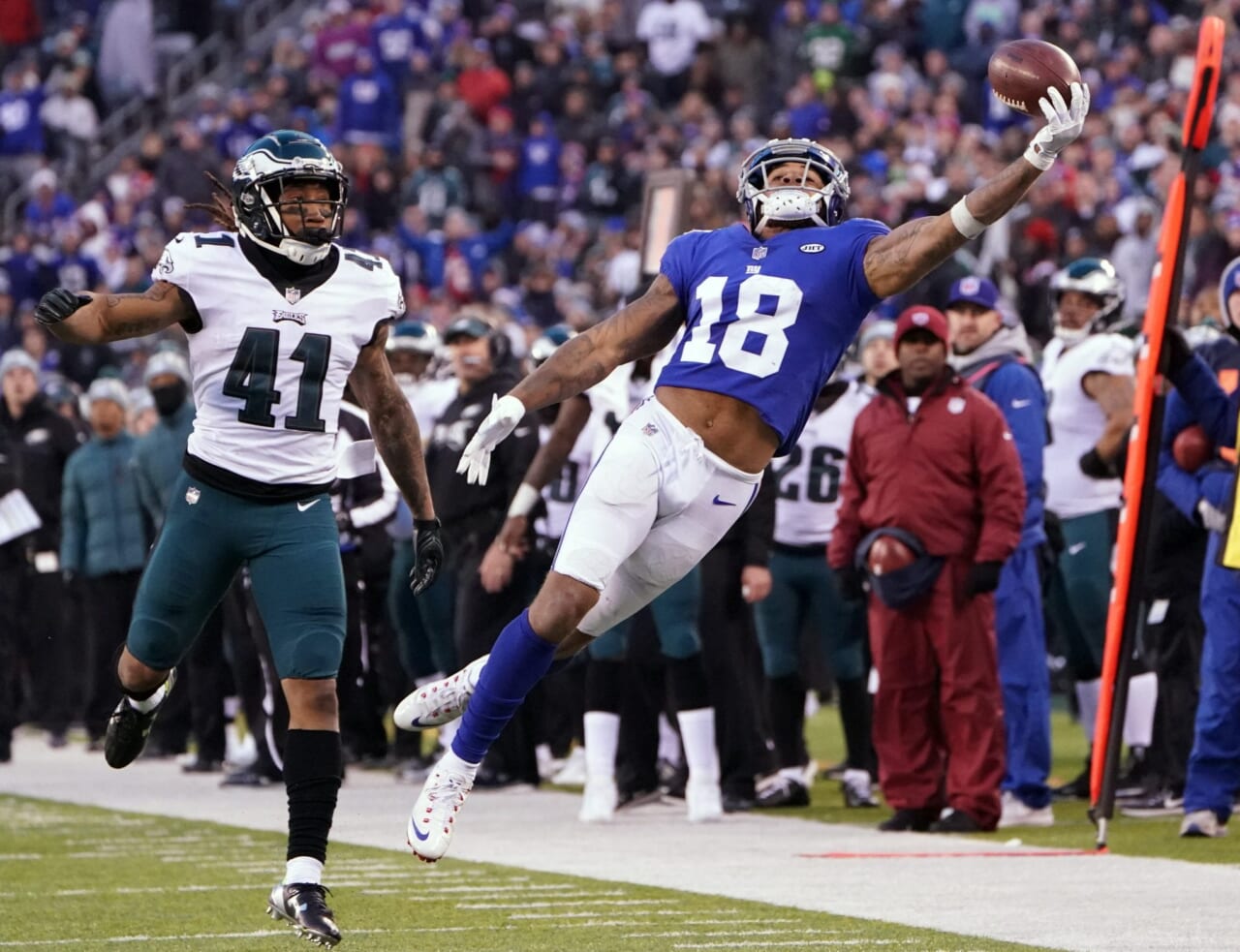 The end of the preseason is one of the roughest times to get cut. A number of players managed to battle through training camp and through four preseason games, which in a way are more important to the bubble players than anyone else, to stay on the team until the week before the regular season.

NFL roster rules, though, means that a team can’t take everyone into week one. Cuts are needed to get the squad down to 53 players, and the New York Giants have just wrapped up a recent round of cuts for that reason. Some of the names were expected to end up on the cut list, other ones are more surprising.

Wide receiver Roger Lewis is perhaps one of the surprising ones. The Giants chose to trim down their receiving corps by getting rid of Lewis, Alonzo Russell, Marquis Bundy, Kalif Raymod, and Amba Etta-Tawo. Interestingly, Hunter Sharp has not been cut, meaning the Giants value the versatility of the inconsistent return man slash receiver rather than the more specific skillset of Lewis. They also saw enough talent in Russell Shepard to keep him around, rather than a bubble player.

Lewis, 24, played college football at Bowling Green State and would have entered his third year with the Giants. He put up strange statistics over his first two years, registering two touchdowns in both 2016 and 2017. The difference between those two years? Lewis had 36 receptions compared to 7, but couldn’t get more than two touchdowns even with Odell Beckham Jr. injured for much of the season.

Additionally, his catch percentage was one of the lower ones on the team during the 2017 season, which might be part of the reason behind him falling out of favor. He failed to pick up the performances during the 2018 preseason, recording no catches against New England and one each against the Jets and Lions.

Still, Lewis took the time to thank the team on Twitter, despite being cut.

thank you new york giants for giving a kid from columbus,ohio an opportunity this past three years..teammates turned into brothers, fans turned into family loved every second. GOD always come shining through adversity, my next opportunity going be special… GODâ€™s plan..ðŸ¤« pic.twitter.com/VOa0QemjKW 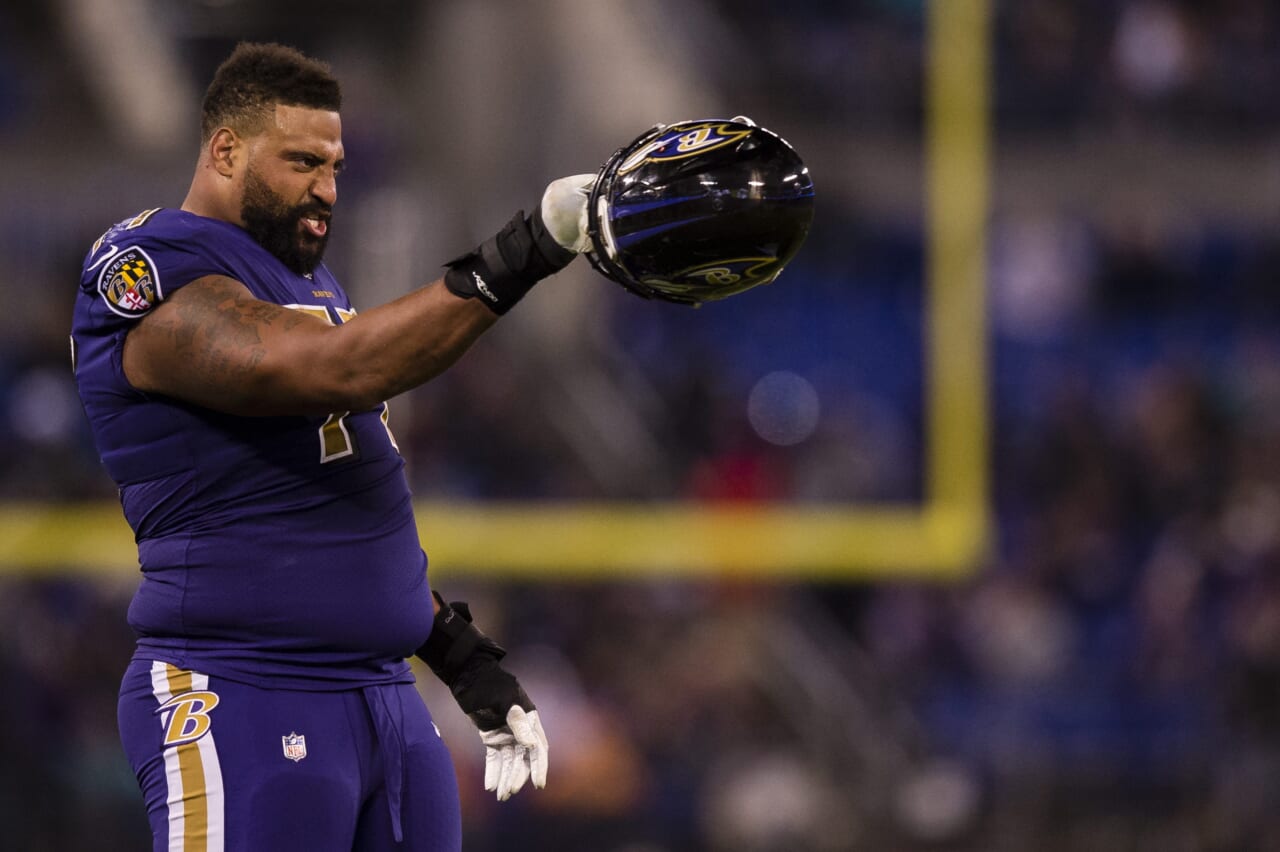 The New York Giants made some surprising moves on Saturday, like the release of safeties Darian Thompson and Andrew Adams. Tack on wide receiver Roger Lewis and defensive tackle Robert Thomas and you start to think the front-office might have gotten a little too cut-happy.

In the end, we must resort back to our logic and realize that a vast majority of the players that were released featured on the 3-13 team in 2017. Most of them received significant playing time and showed minimal value while starting. For example, Lewis started for a majority of the season and managed just 416 yards and two touchdowns. While he offers more value on special teams, it seems as if the Giants have allocated a solid amount of resources towards the improvement of the unit.

Despite the cuts, here are three players that could help the New York Giants considerably:

Quenton Meeks was waived in Jacksonville. I think that would be my No. 1 waiver claim if I'm the Giants.

Meeks was a stellar collegiate player, earning All-Pac 12 notice with 22 tackles, two interceptions and six pass breakups. He has potential as a starting corner with solid fundamentals, but he’s a system guy. If he fits the man-coverage scheme with minimal help over the top, he could be a solid acquisition for the Giants. He’s young and has room for development – with good size and speed, there’s potential for him int he secondary.

There’s nothing better than stealing one of the Cowboys’ best players. Bailey has been a rock for Dallas at the kicker position. He is the second most accurate kicker in NFL history and was a captain for his team. He was earning a hefty contract for a kicker but the Giants could scoop him up on a fraction deal to replace Aldrick Rosas for the foreseeable future. While Rosas has seemed solid thus far, he struggle immensely in the 2017 regular season, completing just 72% of his attempts. Bailey is an 88.2% career kicker.

Since being drafted in 2015, Cooper has been on five different teams. He was a former first-round pick and had immense upside. His athleticism is impressive but technique-wise he struggles. Injuries have also plagued his professional career. He would be an upgrade for the Giants’ offensive line depth nonetheless.

Howard performed well with the Baltimore Ravens at right tackle. At 31 years-old, 6-foot-7, 330 pounds, Howard is a massive man. The Giants wouldn’t need him to be a starter over Ereck Flowers, but rather a serviceable backup that could fill in and potentially give Flowers a run for his money.