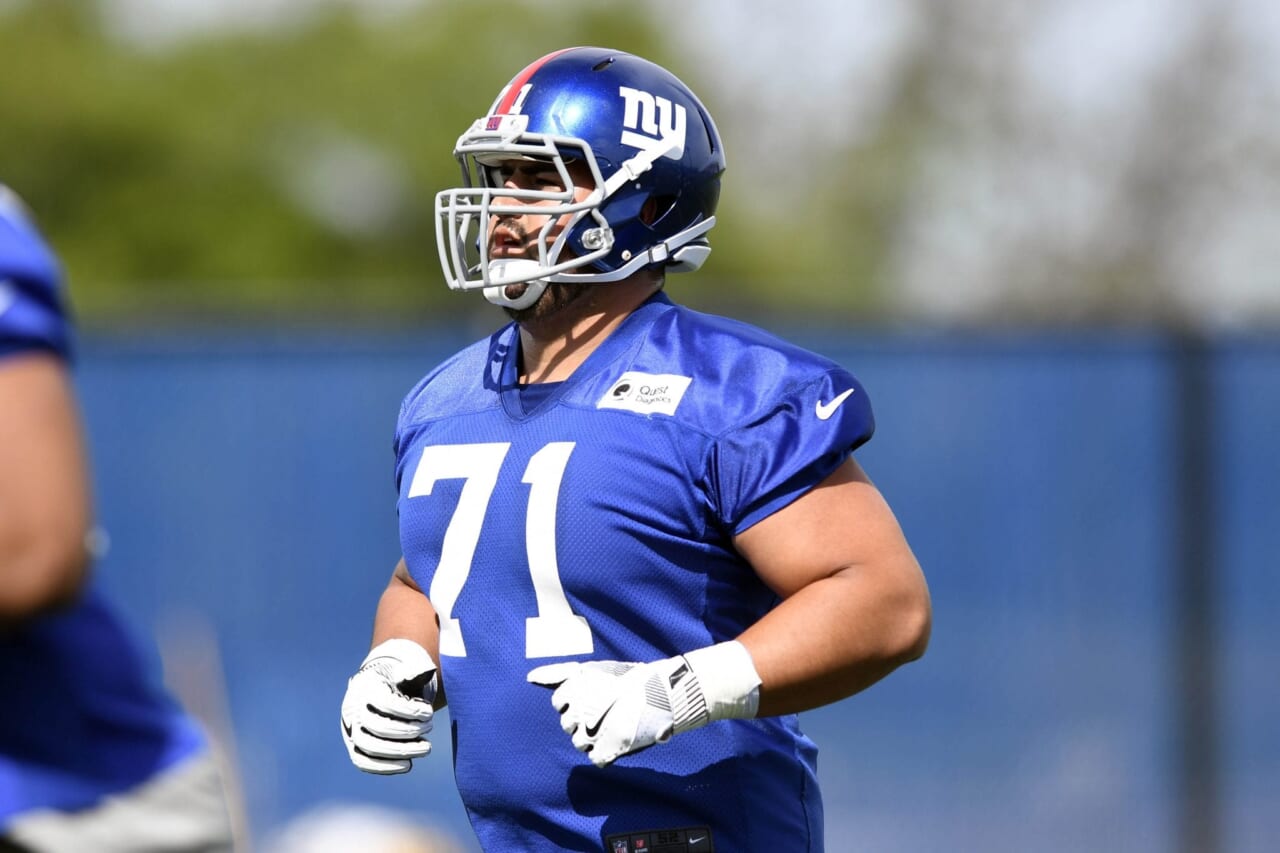 As the New York Giants work through the second portion of OTAs, offensive lineman Will Hernandez has begun his professional development. The UTEP standout struggled to find any sort of success with his team in 2017, as they finished the year 0-12 – but Hernandez stood tall and continued to dominate despite the woes of his team.

Now, the offensive guard has joined the Giants’ ranks, filling a major gap on the offensive line and finally providing Eli Manning with time to work through his progressions.

Like all rookies, Hernandez will have his hiccups, especially with a strong NFC East that consistently maintains some of the league’s most feared defensive lineman. He will be forced to hold his ground against the likes of Fletcher Cox, Brandon Graham, Jonathan Allen, and now Da’Ron Payne. Standing up to these behemoth lineman will be no east feat, but it will teach Hernandez his weaknesses and help him refine his skill-set.

Hernandez enters the league on the smaller side (6-foot-2, 327 pounds). His tenacity and mean streak has made up for his lack of height in the past. As an example, let’s look at Pittsburgh Steelers guard, David DeCastro.

DeCastro is 6-foot-5, 316 pounds, which is actually lighter than the Giants’ rookie. The lack of height will be Hernandez’s primary weakness, but he can compensate with a low center of gravity and immense strength.

One of the benefits that Hernandez has during this ever-lasting offseason is his competition. Hernandez will face off against Damon Harrison, one of the best DT’s in the NFL, and Dalvin Tomlinson, a budding star. They will expose his flaws and help build them into strengths. But don’t get it twisted, Hernandez will also assist in developing the skills of his defensive counter-parts.

The bottom line, the Giants have added a stellar piece to their offensive line that will immediately compete for the starting left guard spot. He brings an anger that the line has been lacking in recent years and will leave it all on the field, even if his team is being blown out. He’s the perfect match for Gettleman’s culture change and will influence a successful future for Big Blue. 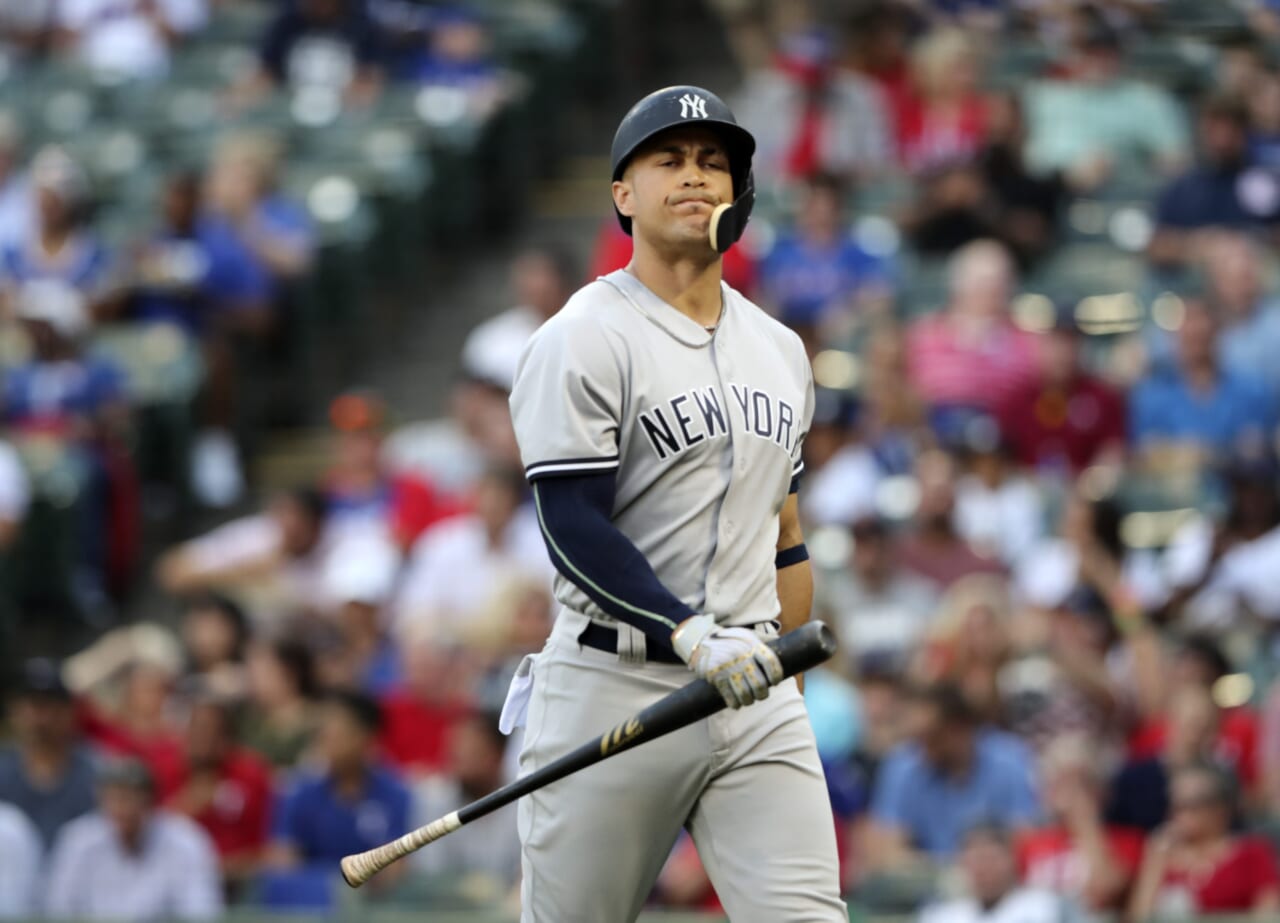 As the New York Yankees push forward through the 2018 season, recently acquired outfielder, Giancarlo Stanton, has had his ups and downs trying to get acclimated with the American League style of play.

Stanton currently has a batting average of .245, with 11 home-runs and 49 hits over 200 at bats. The new Yankee has struggled to adjust to his new team and the expectations set forth for him in New York, and his most present weakness has been on full display this season.

When facing left handed pitchers, Stanton is above average, hitting .370 with 7 home-runs and 20 hits over 54 at bats. That’s stellar, and provides reason to believe his signing is more than justified, but when you take a look at his stats against right handed pitchers, things get dark.. quick.

While Stanton is fantastic against lefties, his struggles have been concentrated to righties. His current batting average is .199, with 4 home-runs and 24 hits over 146 at bats. The interesting part about this statistic is that he has faced right handed pitchers nearly three times more than left handed slingers.

Being that his statistics show a serious decline when facing righties, it’s safe to say he’s failing to live up to his investment, so far. Now, there’s no doubt he will eventually live up to his expectations, but it’s important to notice his most apparent struggle thus far in the season. 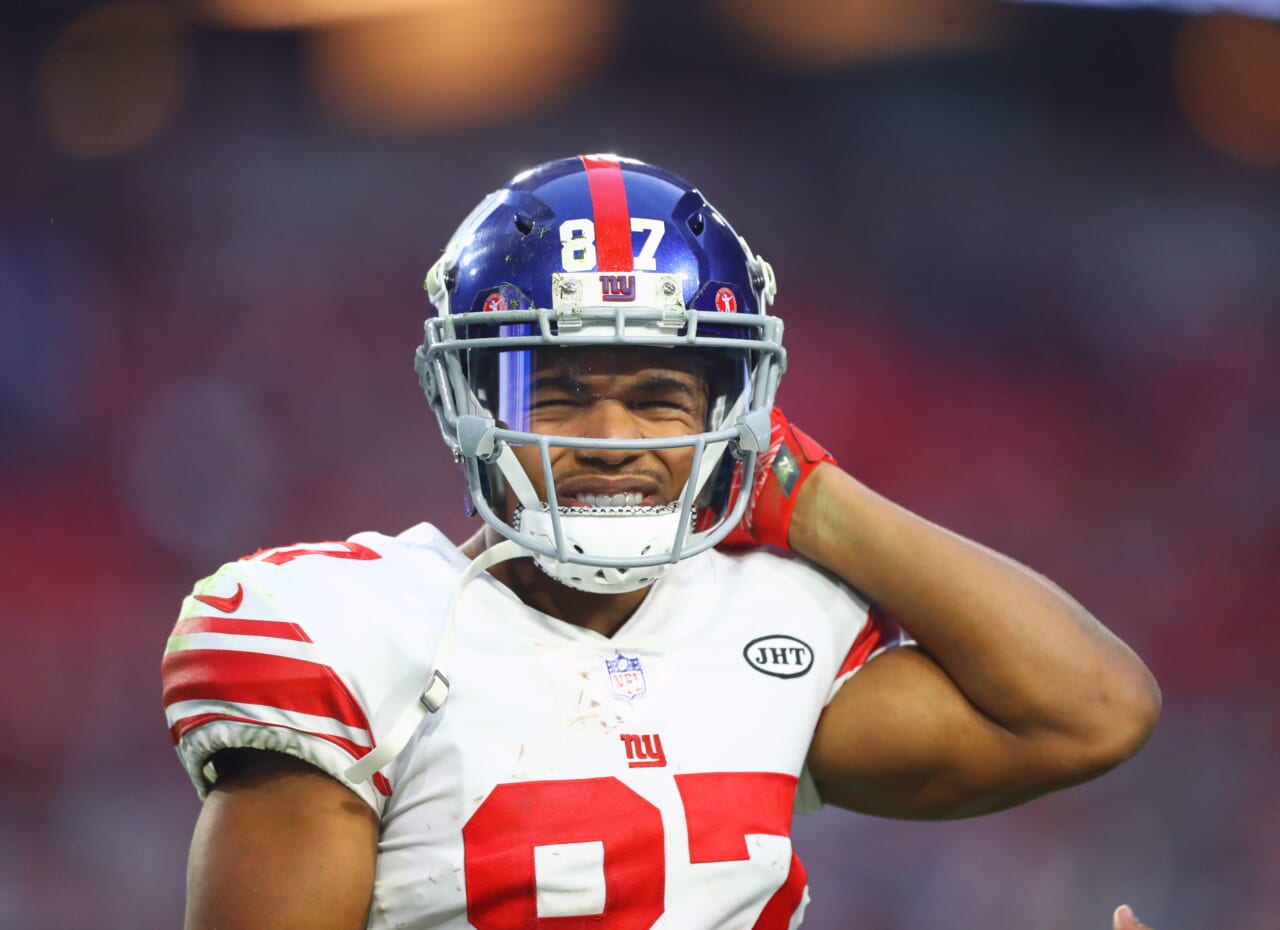 Rookie running back for the New York Giants, Saquon Barkley, is already taking on a leadership role for his new team… Despite the fact that he hasn’t even taken a meaningful snap at the professional level yet.

Wide receiver Sterling Shepard raved about his new teammate after OTAs this week, going as far as to say (in regard to his actions on the field), “Thatâ€™s not really what you see from a rookie.”

â€œThe way that he handles himself, he comes into every huddle dapping everybody up and just trying to get us going. Thatâ€™s not really what you see from a rookie, but heâ€™s been doing a great job out here learning the schemes and bringing energy.”

The change in energy is exactly what you want from your first-round player, especially for a team that was plagued by negativity in the season prior. The Giants have enjoyed four full-team practices, and Barkley stuck beside Eli Manning for a majority of them – learning as much as humanly possible about the new offensive schemes and placements.

Expectation are high for the young running back – amongst the fan-base, media, and coaches. Barkley’s influence on the team has been nothing but beneficial, and his attitude towards success has revitalized the fan-base.

Where has Barkley lined up?

Barkley has played as a tradition running back in the “I” formation, as well as from the shotgun, which he frequently experienced in Penn States’ offense. During OTA’s, Barkley also split out as a wide receiver, playing a dynamic role that put the defense on their heels. According to the rookie, he had worked on developing his route running and pass catching abilities with Odell Beckham Jr.

“The thing that makes him different is he has the feet and speed of a little guy, with the power and strength of a big guy. Thatâ€™s what makes him so darn unique. Heâ€™s different. Itâ€™s like he was touched by the hand of God, frankly.”

Trying to take down a 230-pound running back with 4.3 speed is nearly impossible. Barkley had some of the most impressive measurables dating back to the beginning of the NFL Combine, making him a near sure-fire generational talent. If he can reach his potential at the professional level, we might be seeing one of the best running back and wide receiver duos in the history of the game. 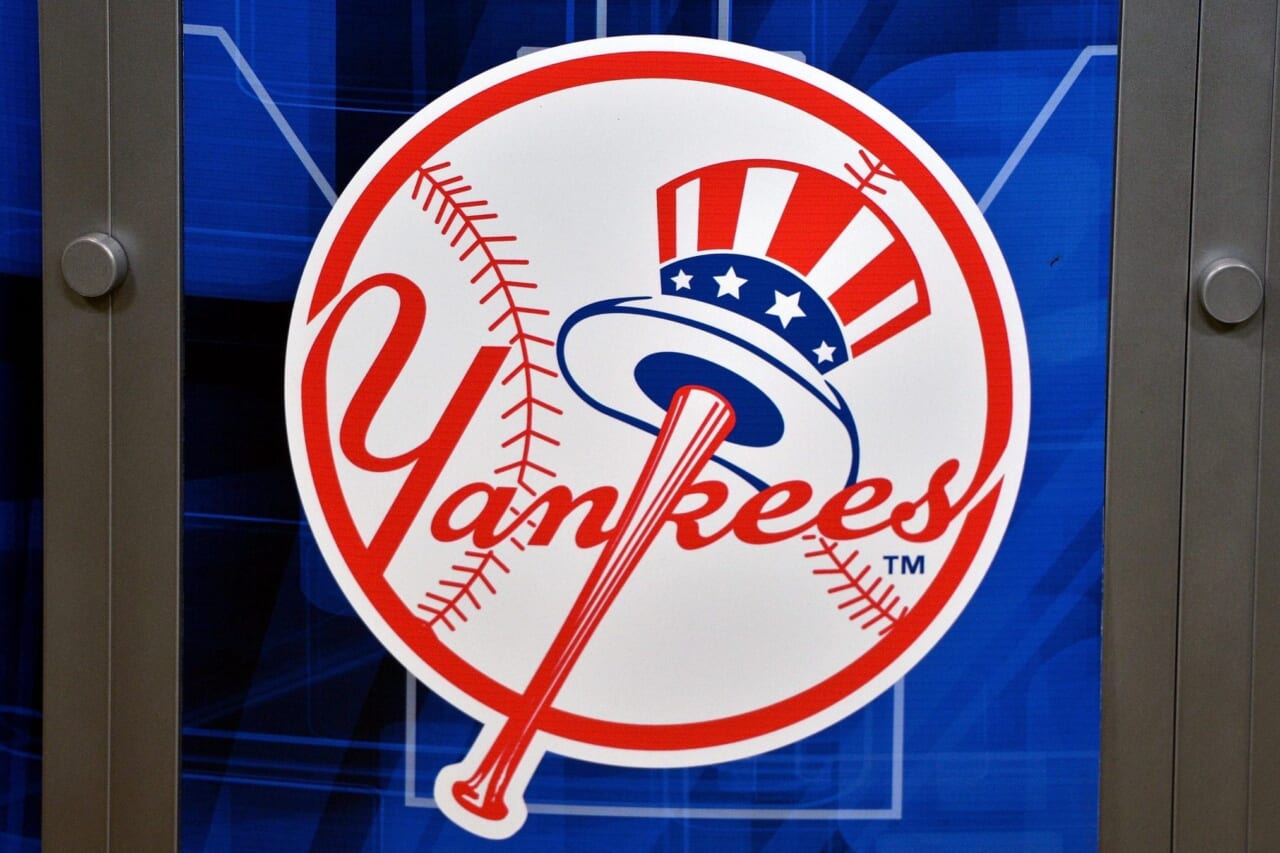 Josh Rogers, 23, is a lefty pitching for the Yankees in AAA Scranton/Wilkes-Barre. The southpaw has been reported by Randy Miller of NJ.com:

â€œ…as a serious contender to get a first big league call-up to make a spot start for the Yankees during their day-night doubleheader in Detroit June 4.â€

Who is Josh Rogers and how has he flown under the radar for so long?

Rogers, 6’3, 220 lb, came out of the University of Louisville, an elite baseball institution, after his sophomore year and was drafted by the Yankees in the 11th round of the 2015 Major League Baseball draft.

Despite being unranked on multiple top lists, Rogers has quickly navigated the lower ranks of the Yankees system and risen to AAA in 2018.

“…has a 4 season ERA of 2.80 and a 1.091 WHIP in the minors. Most of all, he pitches deep into games and threw 182 innings for 3 minor league teams including AA Trenton before finishing at Florida A+.”

While Rogers was perhaps expected to play in AA Trenton this season, he was assigned on April 6 to Scranton/Wilkes-Barre.

Pinstriped Prospects Matt Kardos ranks Rogers at number 39 in their top 75 Yankees prospect list for 2018. Kardos said of Rogers before the season began:

â€œRogers has well-above average control,Â having Â walked just 41 batters in 241 1/3 innings of work in the system. He is equipped with a fastball, curveball, change-up arsenal that generates lots of weak contact. His fastball generally sits 88-91 MPH with some mild sink down in the zone. The change-up usually comes in between 83-85 MPH with late life; it is a pitch that he throws with good action and conviction at this point.â€

Rogers has been better than than even Pinstriped Prospects predicted. Â According to Miller, Rogers is ranked fourth in the International League in ERA with a 2.48 through May 30, has held opponents to two or fewer earned runs in eight of 10 starts, and opponents are hitting .230 against him.

With the success he’s had this season, Rogers has attracted the Yankees’ attention, and fans can look forward to seeing him in Detroit on June 4 making his major league debut. 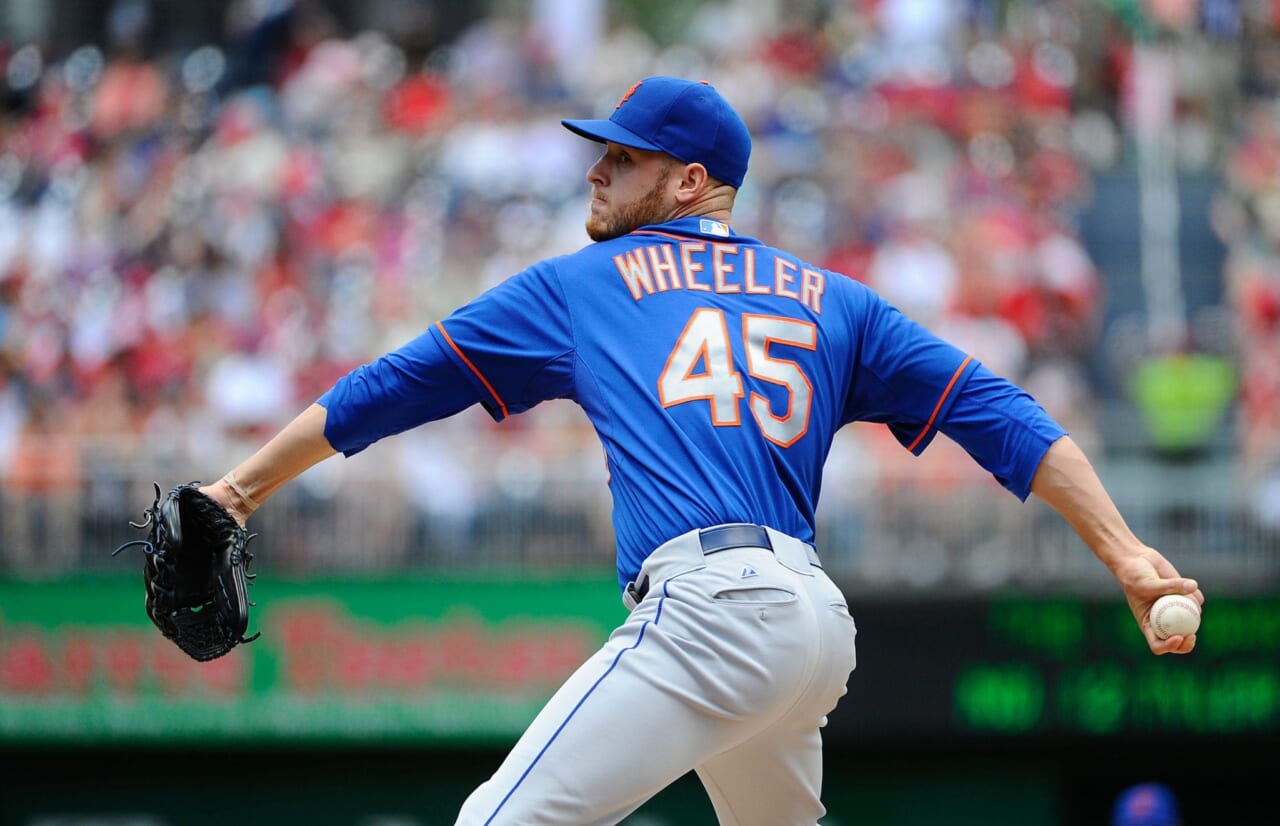 After a 3-5 road trip that included the New York Mets hitting â€œrock bottomâ€, they return to Citi Field for a monumental nine game home stand. They start off with a four game set against the Chicago Cubs. The Cubs just finished a series where they took two out of three from the Pittsburgh Pirates. The Cubs took four out of the six games against the Mets in 2017.

Lugo Gets The Spot Start

The Mets will trot out Seth Lugo to the mound for the series opener against the Cubs. This is Lugoâ€™s first start of the season and is in the place of Noah Syndergaard who landed on the 10-day DL. Lugo has been dynamite out of the bullpen this season and had his first real hiccup in the first game of Mondayâ€™s double header against the Atlanta Braves. In his career as a starter, he has a 12-6 record with a 4.09 ERA. This is expected to be his only start and will likely be limited to 65 pitches.

The Mets offense has slowly clawed their way out of the mess it was in last week. Brandon Nimmo has emerged as the Mets leadoff hitter and a quality everyday player. His .969 on-base plus slugging would be the ninth best in baseball, if he qualified. Amed Rosario has also seen his bat come to life over the last week. He is hitting .333 over his last seven games and has a .583 slugging percentage which is almost 200 points higher than what it is now.

The Cubs Without Arrieta

The Cubs come in with a 29-23 record with puts them 4.5 games behind the first place Milwaukee Brewers. They still remain as one of the better teams in the NL with their young lineup and their revamped pitching staff. Kyle Schwarber has produced a bounce back season with 10 home runs and a .374 on base percentage. Javier Baez found his power stroke to lead the team with 13 home runs and is still one of the best fielders in baseball.

Kris Bryant and Anthony Rizzo are also quietly making their contributions to the Cubs lineup. Rizzo had started the season slowly but has hit .429 with 10 walks over his last seven games. When he is on his game, the Cubs possess one of the most feared lineups in baseball. Jon Lester and Kyle Hendricks continue to anchor the Cubs rotation with the loss of Jake Arrieta and are both in the top-15 for ERA in the NL.