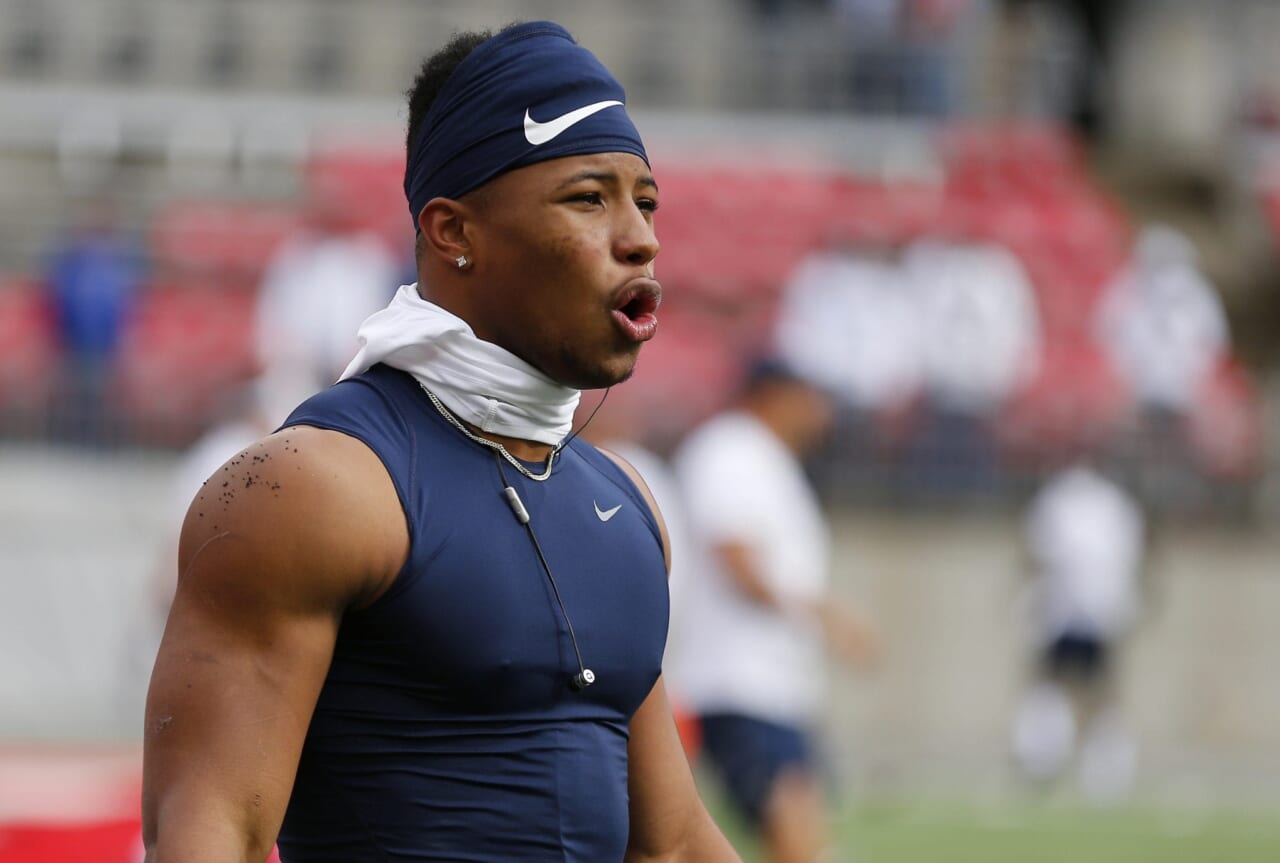 When you come across your local tree, you usually think, “hmm, just another tree,” but don’t be mistaken, you might just be looking at New York Giants‘ running back Saquon Barkley’s legs.

Barkley was taken with the No. 2 overall pick in the draft, and just as the EPA would say… “We are going green!”

The Giants have provided not one, but two tree trunks to sprout some new life into the offense.. Just check them out here!

Johnny Drama: Are those real, or are they implants?@saquon: What?
Johnny Drama: Your calves, bro. pic.twitter.com/i0QrnhEbzi

The rookie running back brings an elevated sense of confidence and versatility for an offense that has lacked serious gusto and unpredictability in recent years. His unparalleled ability to jump cut away from pressure and bounce the ball away from defenders will be an essential tool to keep plays alive and converting on third down.

Barkley has spent a lot of time hanging around with Odell Beckham Jr., who seems to have returned from his injury with a more mature mentality and a renewed dedication to his team. After missing OTAs last season and grabbing negative attention from the media, Beckham turned the tables this time around, enjoying practice with his teammates for the first portion of the voluntary workouts.

Beckham and Barkley have had a growing relationship since before the 2018 NFL Draft, which only benefits the Giants, as their two best players now have a healthy chemistry to work with.

Utilizing Barkley and OBJ on the offense will be extremely interesting, as defenses will now have to honor the run game, forcing them to leave Beckham in single coverage – a daunting task for any cornerback. It will also open up the field for tight end Evan Engram and Sterling Shepard. Finally, quarterback Eli Manning has the tools to show off his best self – a play-action and audible connoisseur. 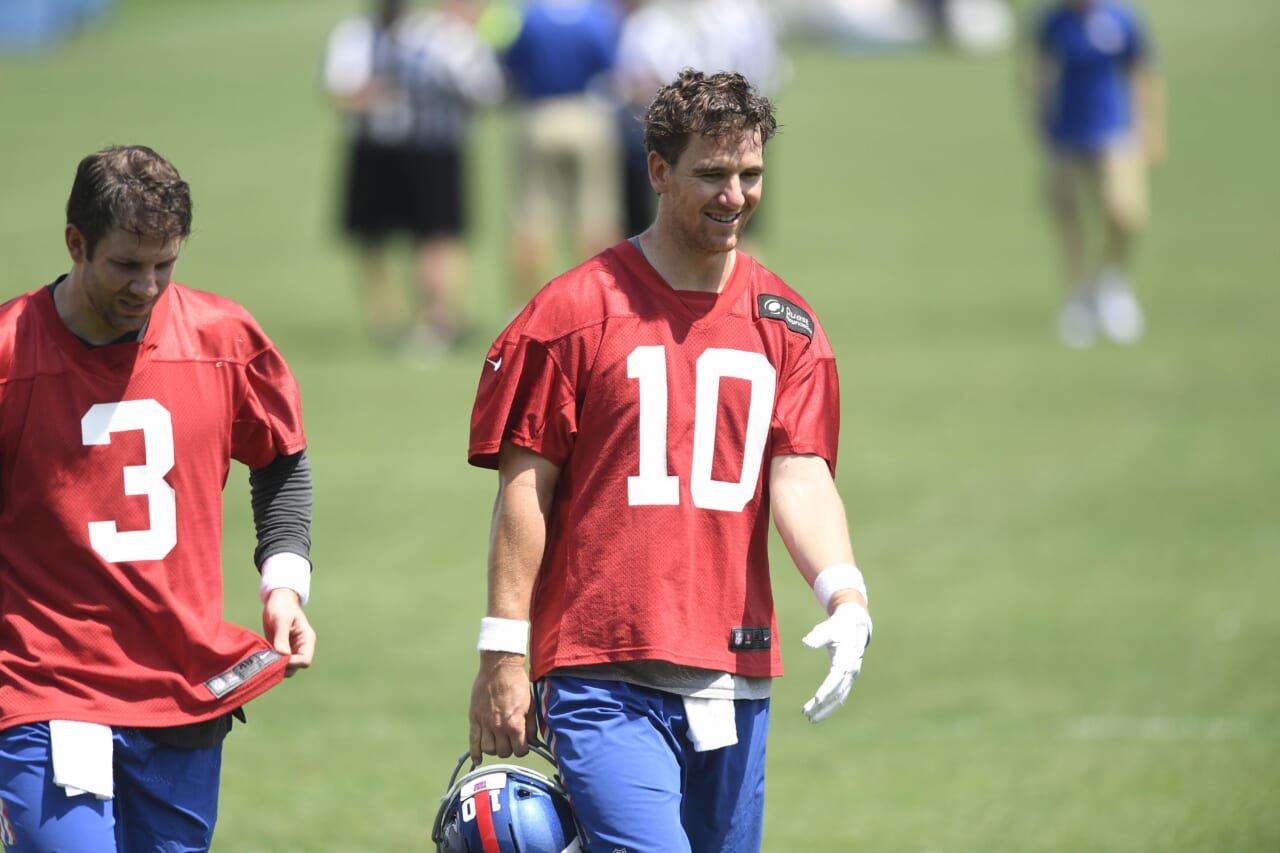 New York Giants‘ quarterback Eli Manning might be at his last life with the organization if he doesn’t step up his game for the upcoming season. With Manning only having two years left on his contract, people are doubting his potential to impress the Giants brass enough to deserve a contract extension beyond 2020.

Taking into consideration that Manning is a 37 year-old quarterback with a not so persistent front line; obviously he isn’t going to be able to play to the best of his ability. On the other hand, Giants fans believe that this Eli is the same QB from past years and still has some fuel left in the tank.

That being said, maybe the Giants need a fresh, young QB to lead the pack. Let’s be honest, Manning’s play-action passes have been weak and his audible calling inadequate, primarily due to the previous offensive scheme Ben McAdoo implemented. With new coach Pat Shurmur taking the reigns, we should expect to see Eli utilize his strengths. But, if Manning has degraded to the point where those strengths might be average at best, it could spell the end for the future Hall of Fame quarterback.

With newly acquired running back Saquon Barkley, Manning will have a dynamic and versatile back that can catch passes out of the backfield and extend pays with his legs. Due to the fact Odell Beckham and Sterling Shepard were injured in 2017, it hurt Manning profoundly considering they were two of the Giants’ top receivers. Don’t forget that wide receivers Brandon Marshall and Dwayne Harris were also injured, leaving Eli Manning with mostly 3rd and 4th string receivers.

Eli’s band of misfit toys at WR dropped 45 passes, which would have brought his completion percentage from 61.6% to 69.5% given those passes were caught. Of course, there will always be some dropped passes, but the Giants led the league by a land-slide.

Being that Manning will enter the 2018 season with a heightened sense of confidence due to the return of his most lethal weapons, and the addition of Barkley and an upgraded offensive line, the franchise QB might be able to extend his stay with Big Blue.

Eli’s brother, Peyton, played until he was 40 years old and was fresh off a herniated disk in his neck. Peyton was forced to travel to Germany to receive the surgery that would ultimately allow him to continue playing in the NFL.

Eli on the other hand has never missed a professional game due to injury, which should allow us to expect quality from him throughout the upcoming season. Backup quarterback Davis Webb has performed well during organized team activities thus far, showing off his big arm and accuracy. The second-year signal caller is making a strong case that he can be the future of the franchise, but a few pre-season games under his belt will be the deciding factor for fans and coaches alike. 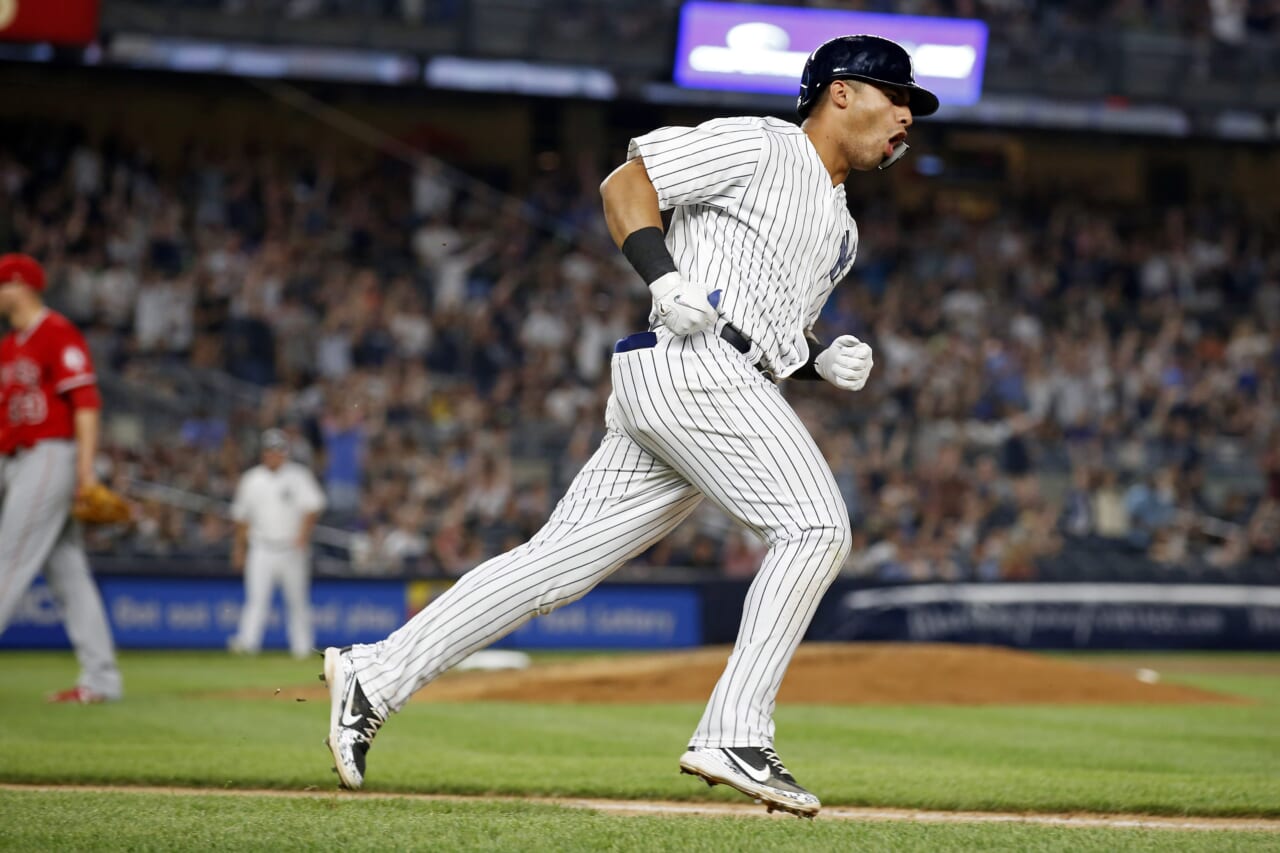 After a week in which we seen New York Yankees rookie Gleyber Torres become the youngest player in A.L history to homer in four straight games he has been named A.L Player of the Week.

Torres slashed .368/.429/1.158 with five home runs and nine RBI over six games between May 21-27th. Gleyber started the week off blasting two home runs against the Texas Rangers in his first multi-hr game and had three multi-hit games during the stretch.

The 21 year old phenom has been everything a Yankee fan could dream of, breaking multiple records already including a few that belonged to the legendary Yankee Mickey Mantle since his call up on April 22nd. GT is making himself a strong candidate to win Rookie of the Year, and we will continue to watch to see if he can keep up this pace all season. 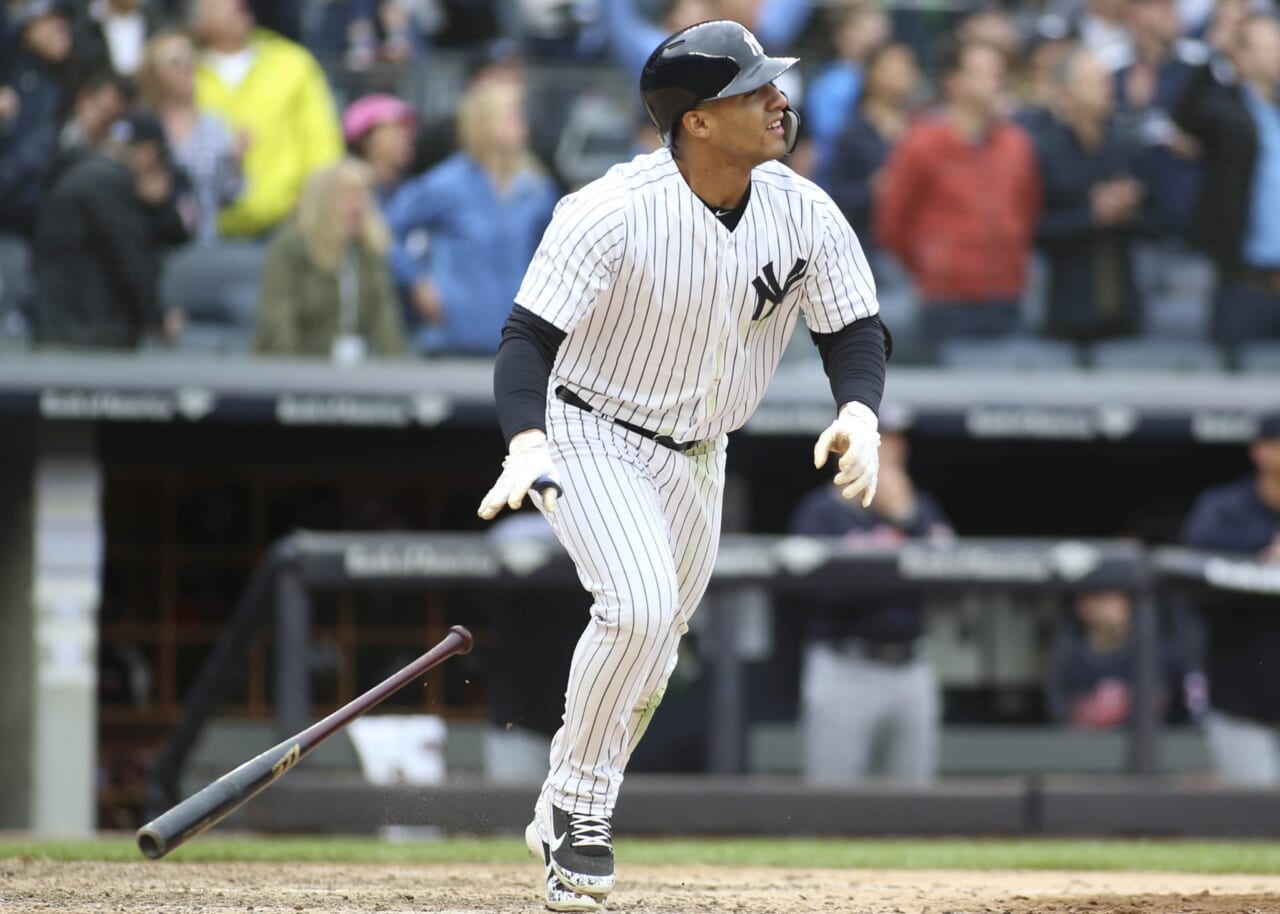 The Yankees won in extras on Tuesday night against the Houston Astros with a display of clutch hitting by an unlikely pair of teammates—Brett Gardner and Gleyber Torres—who hit the tying and winning walk-off runs in a stunner at the Stadium.

Katie Sharp points out the irony of their achievement:

Torres, it seems, makes history every night and so it is fitting that he and Gardner are linked by this terrific stat.

Torres made two of the five errors that plagued the Yankees on Tuesday night; however, he doesn’t let lapses in the field affect his play at the plate. Â Torres was 2-5 on the night with 2 RBIs and that spectacular 10th inning hit to walk-off the win for the Yankees.

Gardner was off to a slow start this season, hitting a mere .198 on May 8, but he’s been hot of late. Â His lead-off homer off Charlie Morton on Tuesday night was his second in four games—and came against a pitcher who’s known to be tough on lefties. In his first multi-homer game of the season, Gardner blasted his second homer in the ninth inning to tie the game. Â He has raised his batting average to a respectable .256.

According to Dan Martin of the New York Post, CC Sabathia said of Gardner after the game,Â â€œHe makes this team go.â€™â€™

And not only on the base pads, but with his elite defense and clubhouse leadership as well.

Gregorius is absolutely right. The veteran and the rookie combined to bring the Yankees back against a fierce rival and that’s what makes this Yankee team a winner.

The mix of talent and skills between seasoned, battle-tested veterans like Gardner and Sabathia and the raw talent of the Baby Bombers, like Miguel Andujar and Torres is proving to be an explosive combination for the Yankees this season.