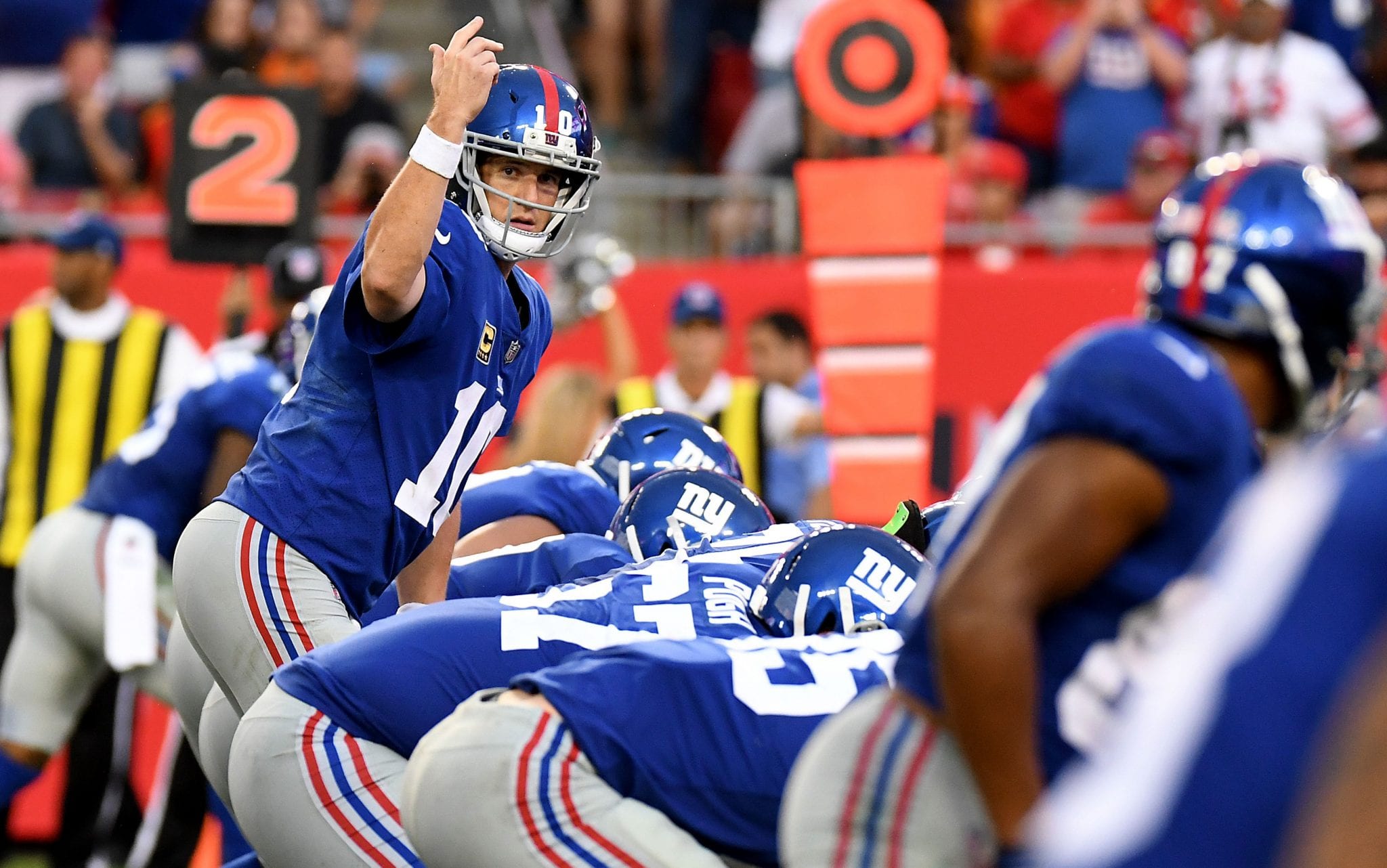 As the New York Giants contemplate taking a quarterback with their No. 2 overall selection in the upcoming NFL draft, some people think it might be a tad premature given Eli Manning’s current state of health.

A good chunk of fans and analysts think Manning is degrading at an astronomical rate after last season’s melt down, which was primarily due to the offensive line and a stripped wide receiver corps. Manning has shown that his arm strength has not dwindled and his decision making is as controversial as always.

Former Giants’ GM Ernie Accorsi is still a believer in Manning, who will undoubtedly be suiting up to start the 2018 season:

“I wouldn’t want to put an endline on him, but I do agree with them that he can play winning, championship football for two years,” Accorsi said via the New York Daily News. “Now, it may be more. I’m not saying that he can’t do more. But I don’t think there’s any question: What I saw last year in the Philadelphia game with what he had to play with, I definitely think he could still take a team to a title. I mean, obviously he has to be surrounded with a pretty good team. But I do.”

Accorsi played a big role in orchestrating the trade that brought the Ole Miss quarterback to New York and Philip Rivers to the San Diego Chargers. Manning has gone on to win two Super Bowls (Rivers has 0) and was named MVP in both of them. In both years, Manning brought his game to another level once the post-season came around, taking a Wild Card team to the big game.

That same level of play doesn’t seem to have dwindled, and it’s impossible to say it has, given the lack of talent he endured last season.

The question is: How long will it take for the Giants to build a solid team around him? And can he deliver within the next two seasons?

“I don’t think it’s gonna take that long. I think there’s some talent there,” Accorsi said. “They’ve got to rush the passer. They have to protect Eli. And obviously the offensive line’s gotta run block. They have receivers — the tight end’s gonna be a terrific receiver, they’ve got tremendous wide receivers. They have good running backs and — who knows? — they may get another one. And if they can rush the passer and protect Eli, I think they have a chance to be good rather quickly.”

The Giants need to improve in all facets of the game. They overhauled the coaching staff, which in turn provided talent at the linebacker and offensive line position. The Giants have a high draft pick which gives them the ability to address a position of need, and ultimately begin to build a winning team around Manning.

Gettleman made it clear in his introductory press conference that the Giants need to improve in rushing the passer, stopping the run, and running the ball. 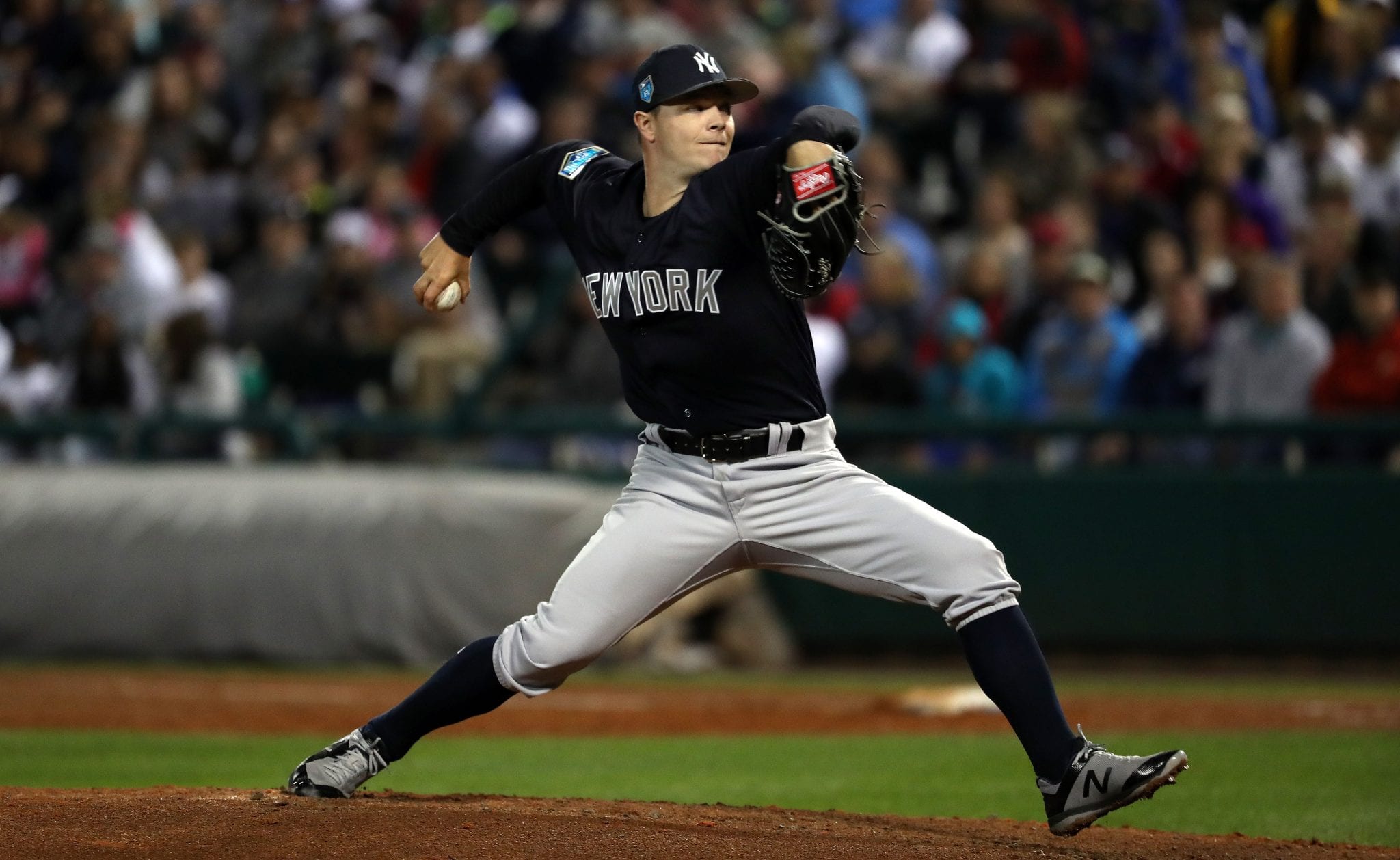 Sonny Gray seemed no closer to figuring out how to regain his All-Star form on Friday night against the Toronto Blue Jays. After announcing this week that he was tweaking his mechanics, his performance against the Blue Jays was underwhelming, and worse, led to an ugly Yankee loss.

First of all, these are the not Blue Jays who were projected by some to finish third in the AL East. This Blue Jay team is outperforming projections to sit in the number two spot behind the first place Boston Red Sox. Gregor Chisholm of MLB.com writes:

“The Blue Jays are scoring more runs per game (6.0) than any team in the American League except for the Red Sox (6.4 entering play Friday night). That has been good enough for a second-place spot in the AL East and early possession of an AL Wild Card spot. On the road, Toronto is 6-3 to start the year and has been outscoring its opponents 47-34.”

Gray had a formidable task ahead of him when he took the mound Friday night—bounce back against one of the hottest offensive teams in the league.

According to Peter Botte of the New York Daily News, Aaron Boone discussed Gray’s performance after the game and said:

“The fastball velocity was down, even from last time where he struggled in Boston… And it turns into a tough night for him,” Aaron Boone said of Gray. “We’ve got to kind of circle the wagons with him and continue to work through it, because he’s really important to us. We’ve got to bea [sic] part of getting him right and back on track, but this was tough tonight.”

The Yankee offense was off to a good start with a pair of two run home runs, one by Tyler Austin in the second inning and one by Giancarlo Stanton in the third inning; however, Gray could not hold the lead in either inning and gave up five runs over 3.1 innings. Despite another Yankee home run by Miguel Andujar, the Yankees eventually lost the game 8-5.

Boone acknowledges that Gray has lost his form and with it his effectiveness and Botte points out:

“Gray finished the game generating only one swing and miss among his 73 pitches. His walk rate of 6.0 per nine innings is nearly double the career-high of 3.2 he posted last season.”

Gray had seemingly lost command of the strike zone and on those occasions when he found it, he did not fool Blue Jays hitters with his stuff.

When asked after the game what had happened in the four hit three run fourth inning, Gray told Botte that the inning “just kind of got away from me,” as if it were a helium balloon he just happened to let go of and not the pounding that it actually was.

Yes, Boone, circle the wagons, and, perhaps, bring the reinforcements, fans agree that Sonny Gray is a problem the Yankees need to solve and quickly.