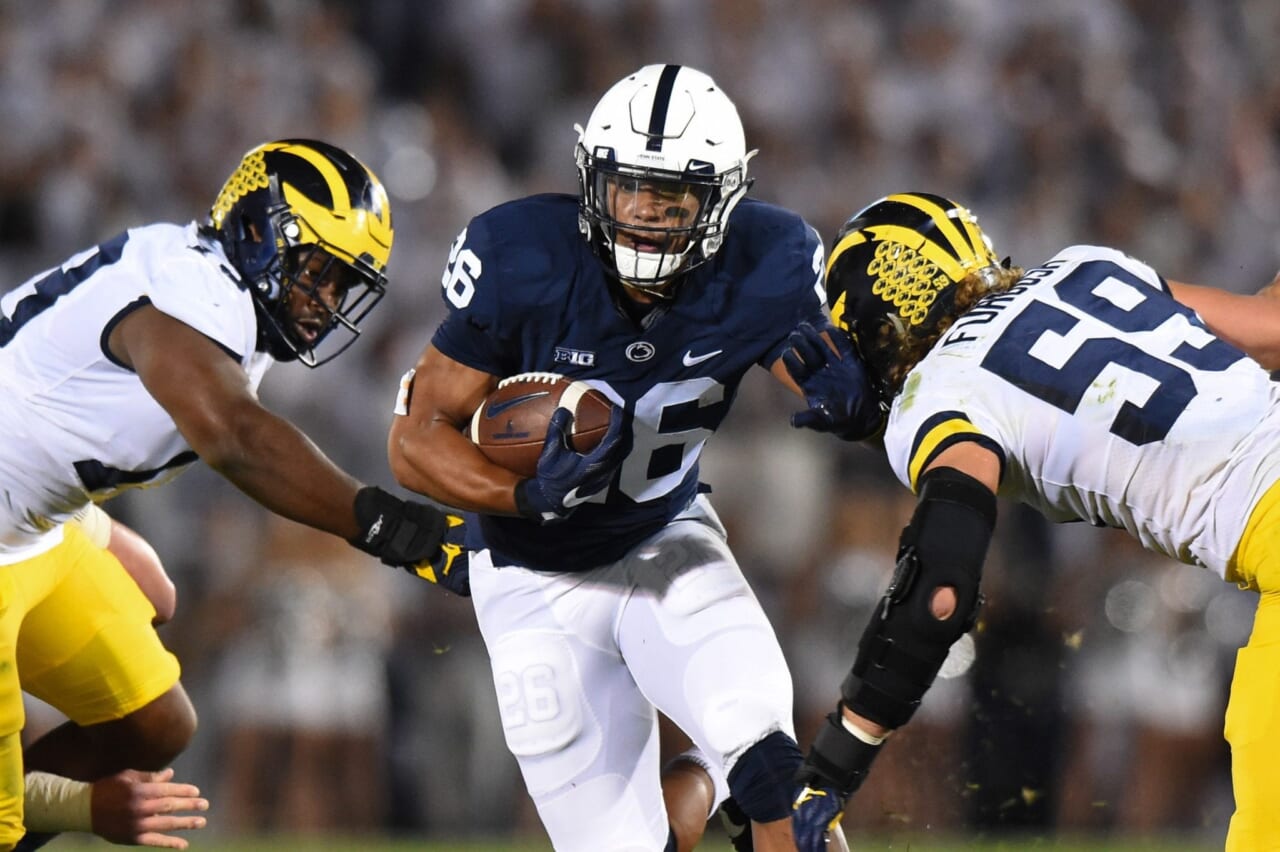 The New York Giants are very much in the race to grab Penn State running back Saquon Barkley in the first-round of the 2018 NFL Draft, but how does he stack up against other running backs?

Here’s a list of several other running backs entering the draft this year, according to CBS Sports:

How do these running backs compare to Barkley, and how can we apply these measurements to ability in the NFL?

Barkley stands at 6’0″ and weighs in at 233-pounds, far and away the heaviest back in this running back group. A five pound difference for a running back is a big one for all you sticklers out there.

The Penn State product has the size of a linebacker and the running ability of a premium half-back. For those that think Barkley can’t break a tackle, or can’t run through small holes, here’s a video to prove otherwise.

Saquon Barkley is simply insane. Here's the video of his 24 total touchdowns in 2017 (18 rushing, 3 receiving, 2 kickoff returns, and 1 passing). pic.twitter.com/rIatTYgJKp

This is all 24 of Barkley’s rushing and receiving touchdowns in 2017, and as you can see in the video, he can break tackles if need be. But his greatest talent isn’t breaking tackles, it’s his sub 4.5 40-yard dash time, and his ability to change directions on a dime. A 233-pound running back with the quickness of LeVeon Bell and the strength of Brandon Jacobs sounds awfully enticing.

Adding a piece like Barkley to the offense would be a huge step up for the Giants, but they must build a quality offensive line around him, otherwise he will be a waste of talent.

Barkley additionally put up 29 reps on the bench press, which is absurd for a running back. Strength like that is seen in most All-Pro defensive lineman. 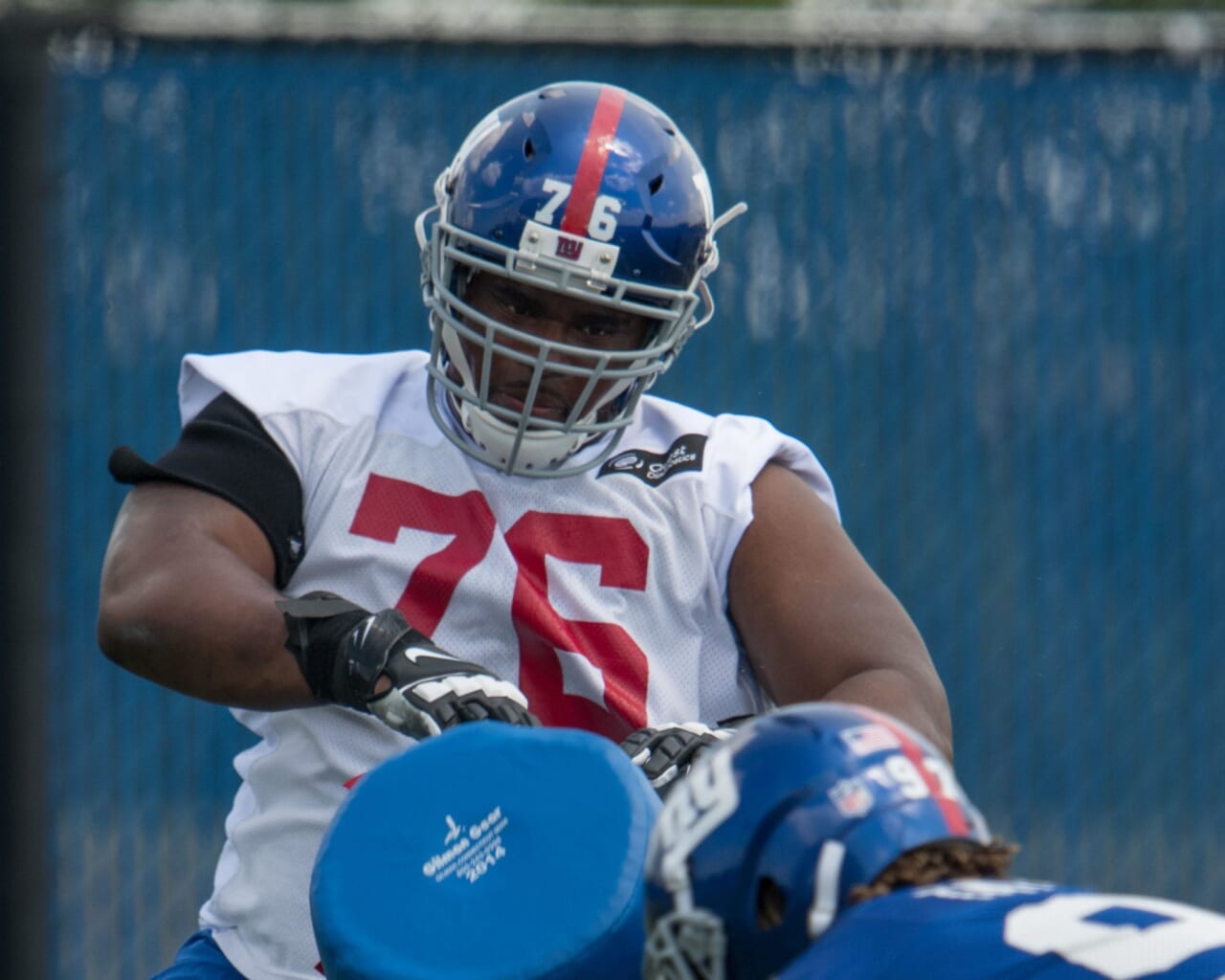 Early today we reported center Weston Richburg may be headed to the New York Jets, and now guard D.J. Fluker might be on his way out as well.

Fluker signed a one-year prove it deal after struggling to live up to his potential with the San Diego Chargers. The guard proved his worth in 2017 with the New York Giants, and will likely be searching for the highest bidder which may not be New York.

The Giants are trying to find the most value in free agency for their offensive line, and by letting Richburg and Fluker go, it will leave them two quality lineman down. Reports of general manager Dave Gettleman pursuing star guard for the Carolina Panthers, Andrew Norwell, is the only offensive line addition that has been expressed.

The options in free agency are slim, which begs the question:

How can the Giants put together a serviceable offensive line in 2018 with the options available in free agency?

The answer is, they can’t… They will need to address the position in the draft. 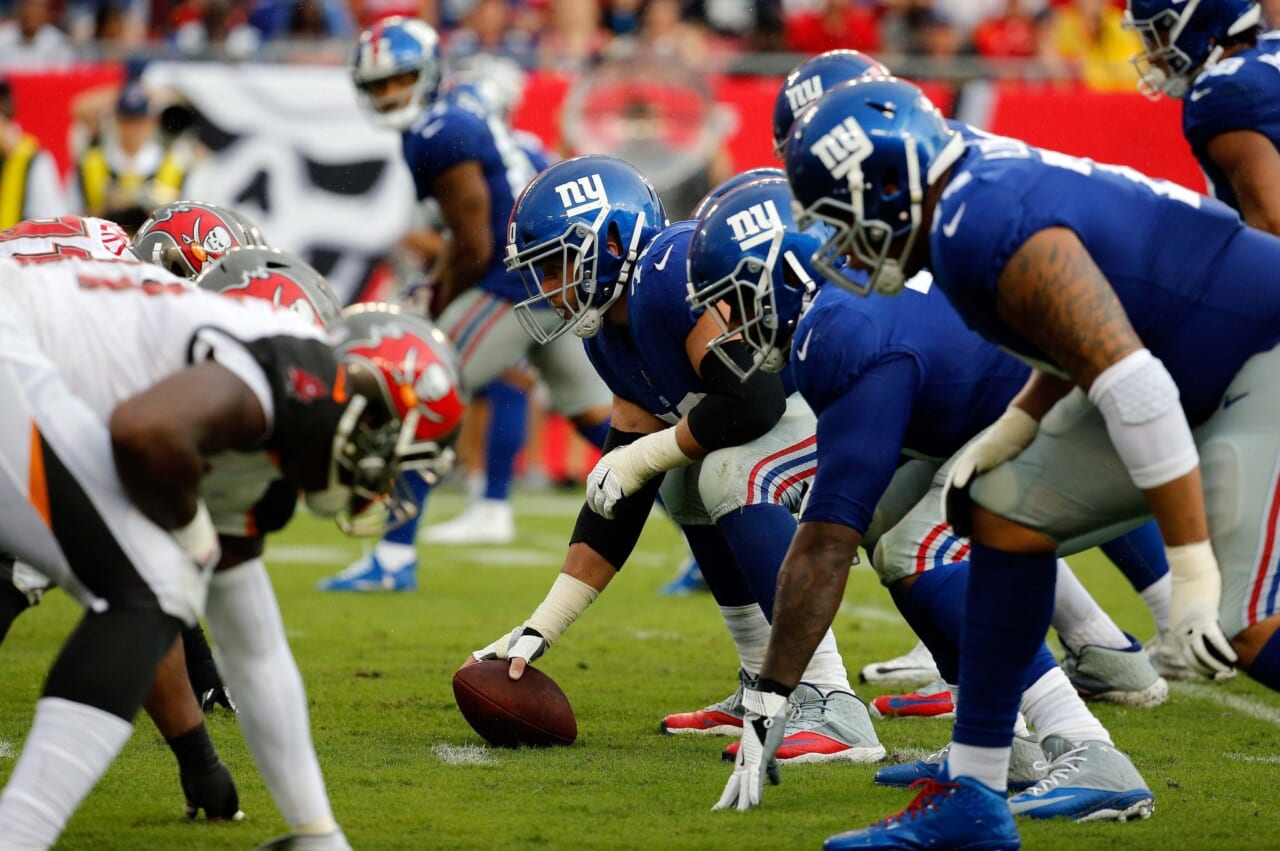 Well, it seems like New York Giants free agent Weston Richburg might be taking his talents to a new team, but not a new city.

Richburg is in extensive talks with the New York Jets to become their new center. With the Giants unwilling to pay top dollar for their lineman, letting him go became the consensus after the 2017 season.

Per @TonyPauline, the #Jets and C Weston Richburg are expected to have "extensive talks" at the combine and him ending up with the #Jets is something "both sides want to happen." pic.twitter.com/dUGBC3ECpK

Richburg played well in 2017, but after being diagnosed with a concussions he never made it back to the playing field, despite advocating for his return.

The Jets would acquire a “B” graded center to add to their offense, who will likely have a new starting quarterback by the end of the 2018 NFL Draft as well. The Giants on the other hand have the opportunity to try and re-sign Richburg, or find value elsewhere.

I assume the Giants will vote to keep reserve lineman Brett Jones and make him their starting center for a steal of a price. Richburg will likely be earning upwards of $7 million per-season, where as Jones would be earning in the $2-3 million range.

Can Jones hold down the center of the line?

The big question is: Can Jones play well for an entire season as the starting center?

After Richburg went down with a concussion, Jones filled his role valiantly, performing well and earning high marks. Per PFF, Jones graded out with a 63.9, ranking 18th in the league. We can give him some leg-room with these number considering he didn’t play the entire season, and didn’t have any help around him (thanks Bobby Hart).

If the Giants decide to address the position elsewhere, it will have to be low-cost and great value, something that the current market for centers is lacking. 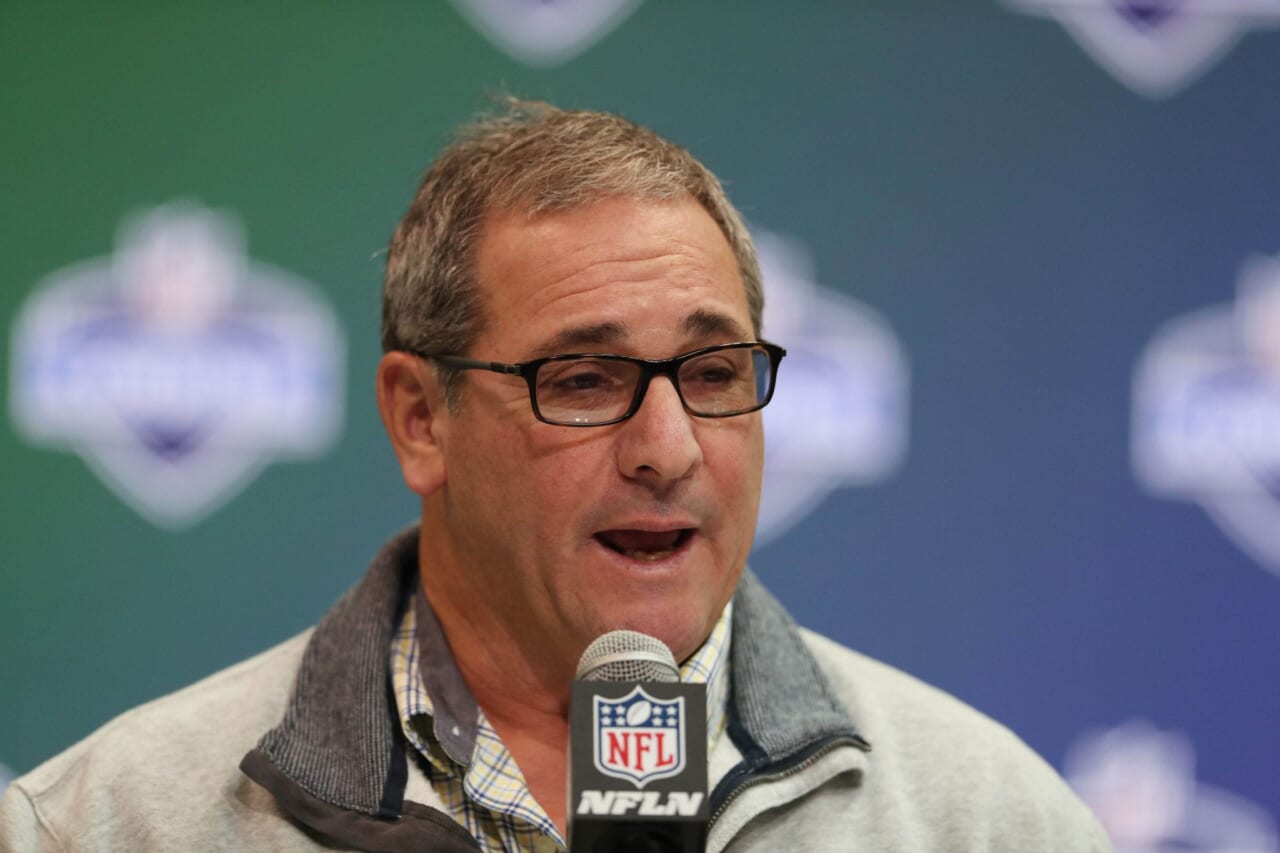 The New York Giants are preparing to begin their evaluation of college players at the annual NFL Combine. Coach Pat Shurmur and general manager Dave Gettleman offered various answers in regard to their wants and needs from the incoming college class.

Coach Shurmur was asked about his preference at running back, and was hinted towards a potential Saquon Barkley pick at No. 2 overall.

Coach Shurmur: I have a high opinion of what a running back brings to your offense. He has to run the ball, pass protect, and catch the football.

The former Vikings offensive coordinator had Latavius Murray and Jerrick McKinnon to work with last season. One was a bruiser and the other a change-of-pace back with work-horse capabilities.

Ideally, the Giants would have an all-around back that would open up a roster spot for another position of need.

Is drafting a running back at No. 2 a bad idea?

The argument against drafting a running back in the top-10 picks is nonsense.

The more frequent argument I hear is: Running backs have a short shelf life, making them expendable sooner than most players.

That argument is irrelevant, since the average playing career of an NFL player is 3.3 years, where as running backs can be effective for up to 7-8 years. Now, I’m not saying drafting Saquon Barkley is the right move, but it surely does make a lot of sense for a team that hasn’t had a big-time back since the days of Ahmad Bradshaw and Brandon Jacobs.

What the Giants’ staff spewed out into the media could have been a smokecreen, but we must take it at face-value for now. 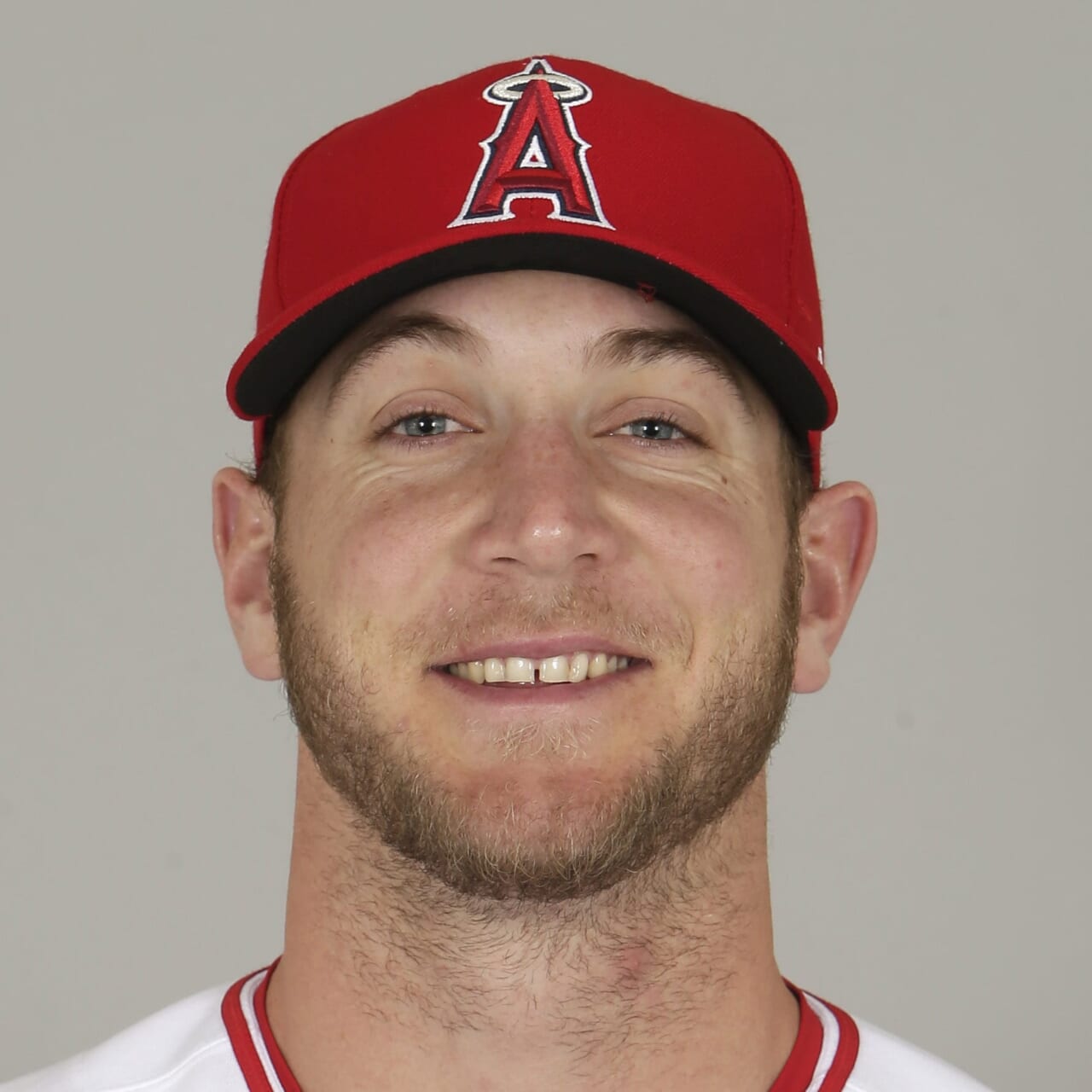 The 27-year old, career minor leaguer looks to make an impact on the 2018 New York Mets roster. Gagnon was signed as a free agent by the Mets in December 2017 after the Los Angeles Angels released him a month earlier.

Originally a starter, Gagnon had an ERA over eight in 2011 which was his first professional season at rookie ball in the Milwaukee Brewers minor league system.

Gagnon regressed in 2013 with a 7-13 record with a 5.43 ERA between A+ and AA ball, but still pitched 129.1 innings. Gagnon continued his inconsistent seasons with a 3.96 ERA in 154.2 innings at the AA level leading to another all-star selection. 2015 was his worst season in the minors where he posted an ERA of 6.67 and could not find a way to keep the opposing team off base whether he was in AA or AAA.

Gagnon was converted to a reliever going into the 2016 season and at age 26 his time with the Brewers was running out. In a make or break year for him he posted a 4.48 ERA between AA and AAA along with seeing his strikeout numbers increase. After the season the Brewers shipped him along with catcher Martin Maldonado to the Angels for catcher Jett Bandy.

His lone season in AAA was an unsuccessful one in which he had a 6.25 ERA, 1.5 WHIP and the organization had him start a few games as well. This led to his release in November and eventual signing by the Mets.

Going into his age-28 season, there is no more time to wait on Gagnon to develop. He had a scoreless inning to start his Spring Training but will need to be almost untouchable to make the opening day roster. The Mets have a pitcher in Anthony Swarzak who took longer than expected to be a good reliever and the team is hoping to strike gold with Gagnon.