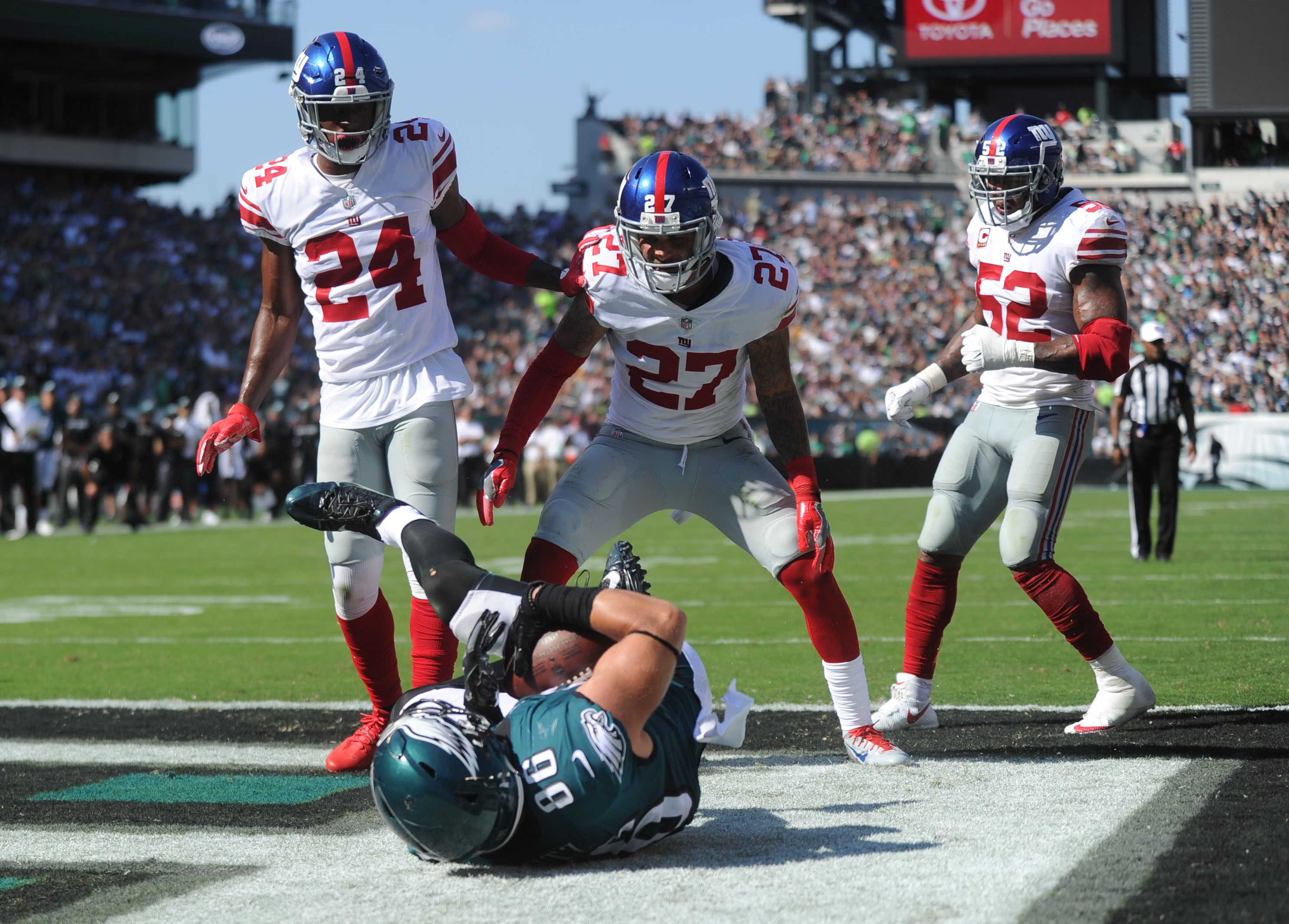 With the conclusion of the Giants coaching search, we can finally divert our questions to other areas of the team:
While much attention has been focused on the New York Giant’s offensive problems this offseason, there is still much to wonder about Big Blue’s defense.
Just two years ago the Giants’ had the second best defense in terms of points allowed, as well as the third best rush defense under the guidance of Steve Spagnuola. But just a year later, both him and his colleague, Ben Mcadoo are out of New York.
The new reign, Pat Shurmur and James Brettcher, are not walking into the prettiest situation. They are taking over a team filled with more holes than a pasta strainer.
These are the biggest questions they will be faced with regarding the state of the team’s defense:
The Giants are looking like they could be 2017’s Los Angeles Rams in 2018… Keep up with YOUR team to ensure you don’t miss out on their greatness! Sign up to our FREE newsletter to hear the news FIRST.
3. Can Eli Apple be salvaged?
The Giants expected a lot from Eli Apple. So much so that they spent the 10th overall pick of the 2016 draft on him. His second year on the Giants was filled with terrible play and even worse maturity. With constant feuds with coaches and teammates, Apple was more of "a cancer" to the team than he was a talent. Just ask Landon Collins. Should the new coaching staff trade him while he’s worth more than nothing? Or should they give him the benefit of a second chance?
2. Should DRC play safety?
Dominique Rodgers-Cromartie will go down as one of the better corners to play the game. While he still has a good deal of talent still in him, there’s no denying the fact that father time is beginning to catch up with him. DRC told the media last month that he would be open to the idea of playing safety, a move many corners make at the end of their career. Is it smart to move now? Who will replace him given the uncertainty of Eli Apple?
1. Who will be traded?
In 2016 the Giants made big offers to Janoris Jenkins and Olivier Vernon. Last year they made JPP one of the highest played defensive players in the game. If the team is going to sign OBJ, they are going to have to clear some cap space by next offseason. Should they trade a major defensive piece for some picks? Who should it be? 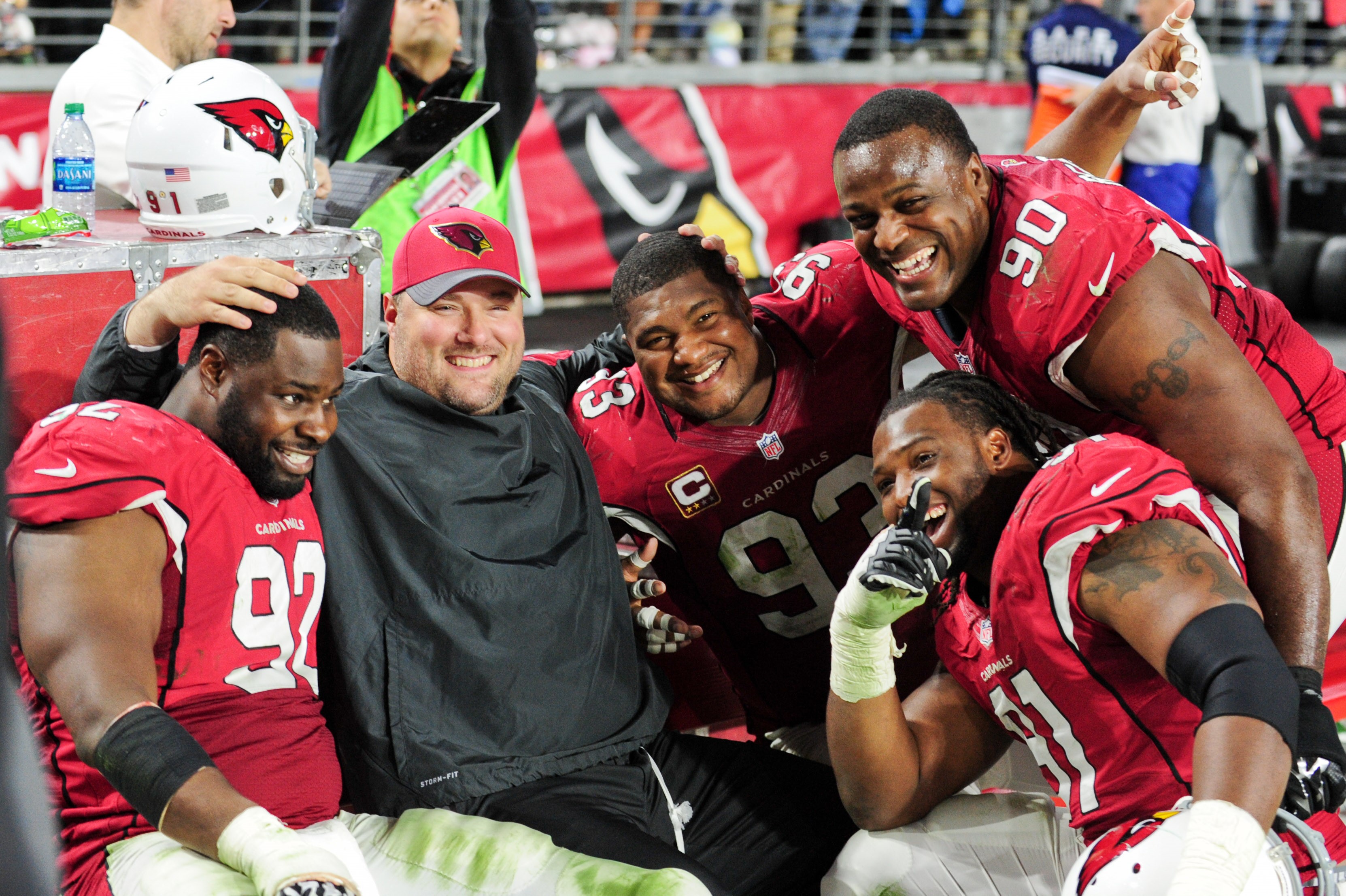 Credits: Matt Kartozian
Giants make great hire with James Bettcher:
For the New York Giants, finding a solid defensive coordinator to complement offensive maestro Pat Shurmur is essential for the balance of the team.
The Giants decided on former Arizona Cardinals defensiveness coordinator James Brettcher over former head coach of the Las Vegas Raiders, Jack Del Rio.
With the Cardinals, Bettcher had a top six defense in each of his first three years with Arizona — an impressive young coach joining the ranks in New York.
Bettcher’s Scheme:
The most enticing part about Bettcher is his defensive scheme and how he enjoys utilizing linebackers. This selection for the Giants almost guarantees they will be addressing the linebacker position during the offseason (here’s a fantastic option for the Giants in the draft at LB). The new DC for the Giants loves to use linebackers in coverage and requires them to be fast and capable of making tackles in space.
With Arizona, Bettcher had linebacker Deone Buccanon, a multi-faceted defender with the ability to cover tight ends and make open field tackles. He is also stellar against the run. Finding an all-around play-maker in the middle of the field is essential in the success of a defense, and it’s something the Giants have ignored for years.
The Giants are looking like they could be 2017’s Los Angeles Rams in 2018… Keep up with YOUR team to ensure you don’t miss out on their greatness! Sign up to our FREE newsletter to hear the news FIRST.
Here’s a look at the type of LB Bettcher will be looking for:
Bettcher plays out of the 3-4 defense, lining up three defensive-lineman and four linebackers on most plays.
What does this mean?
It means he will likely be relying on Olivier Vernon, Jason Pierre-Paul, Damon Harrison and Dalvin Tomlinson to wreck havoc on opposing offensive lines and quarterbacks. He will likely rotate in defensive lineman and maintain his three lineman and four linebacker approach. It’s unknown whether the Giants will choose to transition from their 4-3 defense to the 3-4, but it shouldn’t be ruled out with the hiring of Bettcher.
His scheme revolves heavily around man-coverage and having players that can not only tackle, but drop back into coverage as well. He keep this middle of the field restricted and forces the ball to the outsides.
With Janoris Jenkins, Landon Collins, Eli Apple and Dominique Rodgers-Cromartie manning the boundaries, the Giants have all the support they need to lock up the exterior of the playing field.
The Giants struggled in 2017 to stop the run due to poor linebacker support, and often allowed big-plays on wide-receiver screens and crossing-routes. The solidification of the middle of the field will essentially make those types of plays non-existent, and will completely take out a portion of the opposing offense’s playbook.